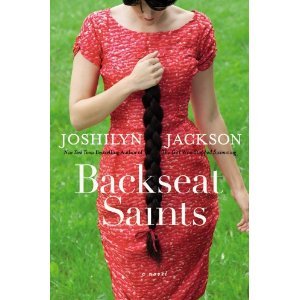 I told you Jackson's book was compelling. See? I wasn't kidding. Last night I couldn't stop turning pages 'til the very end, desperate to see how it turned out. The superb tension, coupled with vibrant characters, made me care deeply about what happened. I had to know the outcome and couldn't pull my eyes away 'til I did. Now that's a good read. Not a great read, not literature, but the sort of book so absorbing you find yourself mentally pushing away anyone who comes near you before you've turned that last page, sending out a signal, "Come near me at your own peril!"

Main character Rose Mae Lolley was the victim of violent physical abuse, first from her father then her husband. Winding up in the hospital time after time, claiming she'd "fallen down the stairs" (though she lived in a one-story house), an attending nurse tried over and over to help her, to coax her into reporting her husband's abuse. She even offered to be a witness, to testify no one could injure herself so badly, over and over, that this was clearly the work of a very strong man. But each time Rose defended him, a huge man more than twice her size who threw her around like a rag doll.

Part of the reason she kept quiet was his family, a tightly-knit collection of testosterone mothered by a withdrawn woman who knew to keep her mouth shut lest she risk her own neck. If she were brave enough to testify against her husband, his family would have finished the job themselves.

Rose, who had two personalities – "Ro" to her husband, the perfect, gentle wife, and her given name "Rose Mae," the southern tough girl. Rose Mae wanted to kill her husband and escape, but Ro endured it all out of misplaced love for the man her husband could be at times, the man she fell in love with and married.

I got a little weary of all the sex in the book. Though not a prude, too much sex gets on my nerves. I didn't appreciate how freely Rose gave her body to men, even those she barely or didn't know. It irked me she was so willing, free spirit or not. She's an example of the sort of woman who uses her beauty and chameleon-like personality to become whatever the man she's after wants her to be. Then again, wouldn't that fit the character of a woman who stubbornly endured abuse after abuse?

And the denouement? A little stretched, but not beyond the realm of
possibility. Some will probably be put off by it, thinking oh, come on!
Would someone really do that, and would it wrap up all the strings so
neatly?

Final verdict is I enjoyed the fast pace of the plot, the vivid characterizations, and Jackson's ability to manipulate me like a marionette. If you already enjoy her work you'll certainly love this one. I predict it will shoot up the bestseller lists, and may even make it into film. We'll see.

[I received a free review copy of this book from Amazon.]