You may know Gillian Flynn from such things as one bazillion weeks on The New York Times Bestseller List, or the hit blockbuster film adaptation of a little book called Gone Girl. Or, you may just have crawled out of the primordial ooze and have no idea what I’m talking about. For the latter, have a crawl back in and wait for this to pass. It’s a short book, thus a short review. We won’t be long. 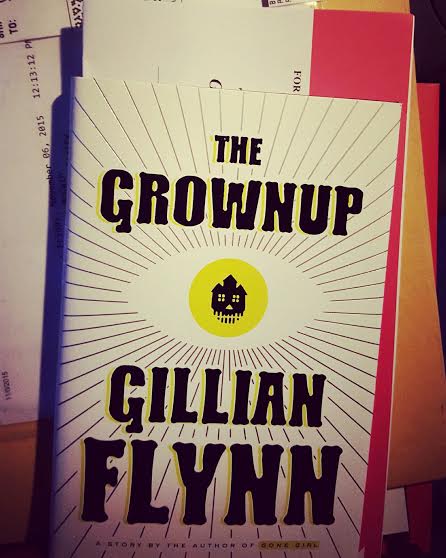 The Girl, She Done Gone Again

Reportedly, Flynn didn’t feel like writing another Gone Girl just yet and, you know, can you blame her? Your previous book goes blockbuster and there you are again, sitting down in front of the blank screen. Even if you have just floated back down from a meteoric rise, do you actually want to strap on for another trip in the rocket so soon?

No, you probably don’t. What you want is permission to write something different, off your main genre but not so far removed it takes you completely out of your comfort zone. This is a way-station here, not a complete change in course. So, what you do may be something like this:

If you’ve read Gone Girl (and odds are you have) you know Gillian Flynn’s talent for playing cat and mouse with her readers. InThe Grownup she does it again but in only 62 pages. The story opens with this: “I didn’t stop giving hand jobs because I wasn’t good at it. I stopped giving hand jobs because I was the best at it.” It’s a helluva way to start, and the curiosity it raises is just the beginning. The narrator is a born and raised scam artist who sees a chance to leave light sex work behind for a career in what she does best, reading people and telling them what they want to hear. Susan seems like the perfect mark–rich, desperate, and terrified of the evil she says lives in her house. But things are not what they seem, especially with Flynn at the helm. A short story written for George R.R. Martin’sRogues anthology, The Grownup is a tightly wrought psychological thrill ride that will leave readers replaying every well spent moment. – Seira Wilson

Only, it isn’t all that. It’s a short story with a certain twisty-turny appeal but it’s too short to have much chance of really grabbing a reader by her throat. It’s a nice story, with some good bits of zing (professional term). I wish I’d written it, sure, but that’s because it’s me and I haven’t just come off a blockbuster thrill-ride.

Really, hard as it is to believe, I haven’t.

For three years, I gave the best hand job in the tristate area. The key is not to overthink it. If you start worrying about technique, if you begin analyzing rhythm and pressure, you lose the essential nature of the act. You have to mentally prepare beforehand, and then you have to stop thinking and trust your body to take over.

I love her sense of humor, her heart and basic core of integrity. When a middle-aged woman comes to her, begging for her help, it touches her. The woman’s upset. There’s an evil presence in her home and she’s at her wit’s end. Can she help?

She can, she says. And she will.

Now, at 64 pages, there’s not an awful lot I can give you on the story without blowing the whole thing wide open. It’s meant as an exercise in flexing muscles in a ghost story turned dark side of the human mind way but, much as I hate to say it, it falls flat. As I said earlier, there just isn’t enough space within 64 pages to make the tight turns Flynn needs. She succeeds in making me care about her characters, that’s a given. It’s just the story itself can’t quite pull it off, can’t send a chill down my spine or even leave me feeling satisfied.

Unlike the protagonist’s clients.

It’s a short story, pulled from an anthology. Where it should have stayed. As one of many, it’s fine. As a stand-alone hardback for the price of $ 9.99, it simply doesn’t cut it.

If you’re going to wow us with a short, every word must not just count but carry enormous weight, expressing artistry as much by what’s missing as what’s there. If your goal is to twist once, maybe twice, you have to be very fleet of foot and, unless you’re a miracle worker, give yourself the space in which to do it.

I saw what she was trying to do, the theme she was going for. It just didn’t happen.

One thought on “what happened when the girl came back, then left again: gillian flynn’s ‘the grownup’”

I could have saved my Black Friday deal duvet cover set as one of my Christmas gifts to myself. However, since I've been feeling down lately I went ahead and opened it