Victoria: A Novel by Daisy Goodwin

A Tree or a Person or a Wall by Matt Bell

The Lesser Bohemians by Eimear McBride

The Marches: A Borderland Journey between England and Scotland by Rory Stewart

Well, then. What have we learned this week?

I had a kick in the teeth of sorts, one FB-active divorced parents will identify with: my ex’s next wife has befriended and begun posting photos with my youngest child, something I know not because I’m stalking her – though, okay, sometimes I do: HI! – but because it’s the first time I’ve had to see her face pop up on my personal timeline along with one of my children’s.

So yes, if she stumbles past here now she knows target acquired. But then again, if she stops by she won’t stay long. Because I write mostly about literature. And, well… 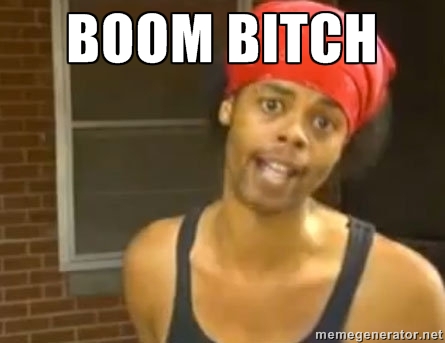 Can I get a nerdy boom?

All around shorter lists this week, bound to happen from time to time. Not as much came through the door, and I continue to progress in my reading at a snail’s pace. Part of this is due to reasons noted previously, but it’s time I admitted it’s also directly related to my fixation with the series Dexter.

A serial killer is my guilty pleasure. When I get home from work every day I watch at least two episodes. Sometimes more. I switch to books when I hop into bed, but several hours’ worth of potential reading time are given over to watching people get hacked into pieces, then tossed into the ocean.

There is some bleeding over into my daily life directly resulting from my binges – and yes, that’s a freebie. Discussing fictional, theoretical murders (I swear, because prison libraries could never rival my own), I mentioned to my older son that Dexter‘s full of great advice regarding how to get rid of bodies. Over breakfast we discussed the most efficient way to kill: severing the aorta with one good thrust of a knife well sharpened.

Then I asked him to pass the salsa. 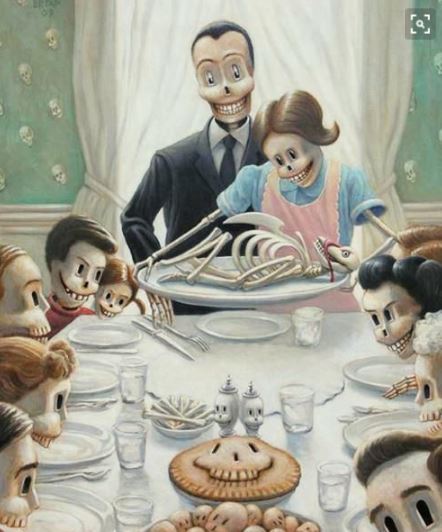 Perhaps most disturbing, I’m finding myself rooting for a serial killer. It’s true his victims are reprehensible, have taken innocent lives, and he’s taking them out before they can do more harm (since they’ve slipped through the justice system and gotten away with murder – literally), but the man’s killing people. The guilty are one thing. Not that I condone murder (this got weird, didn’t it), but an eye for an eye, now that I can get behind. But now, when a character gets annoying, I’m thinking, “Dexter, you know what to do!”

Out of context, that sounds disturbing. Hell, in context it does. But if you’ve watched the show, you’ll know he’s an endearing psychopath. Much like how I’m an endearing raving lunatic. You do agree, right…?

I ASKED YOU A QUESTION.

The TV alternative to bingeing a great series is watching Donald Trump having his tantrums. I like my psychopaths fictional, thanks.

In what I’m realizing is more free time than I admit to having when anyone asks if I want to do something, I’ve been book blog jumping much more often. My Twitter feed is my first source for all news – books included – but it’s satisfying complementing that through reading what kindred souls have been enjoying – voracious readers whose opinions I respect. It does make my TBR list grow proportionately, but that’s no reason not to enjoy myself threading my way from book blog to book blog.

Actual reading-wise, I’ve finished both Matt Bell’s latest collection and the surprise upstart Molly Fox’s Birthday. I plucked it off the shelf at random, curling up in bed with it like a squirrel does its nuts. Remember how I don’t need a man in my life? This is why. He’d roll over on my books and cause me to lose my place.

Don’t make me go Dexter on your ass, son.

Reviews of both books to come.

“I realise that a certain school of thought says that who we are is something we construct for ourselves. We build our self out of what we think we remember.” – Molly Fox’s Birthday

In current reads, two are for review: Eimear McBride’s The Lesser Bohemians and The Marches: A Borderland Journey between England and Scotland by Rory Stewart. The former forces me to switch gears to more stream of consciousness prose, working out reading muscles I’ve let atrophy. I’m getting into the rhythm, but slowly.

The latter took a bit of warming up to, due to the fact it started out weighted too much toward Stewart’s relationship with his father. A book should build interest in the main theme, concentrating on developing the hook that’s in the blurb – in this case, and more urgently, the subtitle – before trotting off in another direction to a more personal theme. Get me interested in your project, what the book’s ostensibly about, then tell me about your complex feelings about your father.

Now that I’m about halfway, it’s growing on me. I expect my thoughts to be positive.

I have a goal of getting more detail into these commonplace posts, including more conventional commonplace book content , i.e., quotes and specifics about other elements of my reading – ephemera, in other words. This includes trending topics I’m following, sidebars such as my decision to re-subscribe to The New York Times and why, what I’m picking up from other bloggers, and other details I’d like to track.

Developing the habit of posting on this theme was the first step. Fleshing it out is next.

Speaking of fleshing, maybe I’ll watch another episode or two of Dexter this evening. You know, while I’m sharpening my knife set. Because I watch Chopped, which is about cooking.

Have a lovely reading week. Until next time.