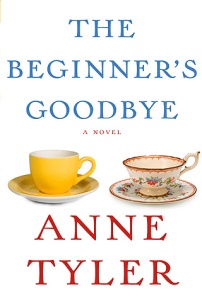 My relationship with Anne Tyler has, as I said in my previous post, been a bit rocky. She's singular in the whole book universe for my feeling of disappointment that I can't enjoy her. She's sweet, looks utterly kind and she's so well-beloved in the U.S. But I just cannot, for the life of me, bring myself to like her writing.

Why the angst? That's the question. I dislike loads of writers; you wouldn't have time to read the full list. And I have nothing against her personally – who could? Look at that face! It screams I AM A NICE PERSON!!

So… why does this bother me so very much? Perhaps it's because she's one of those homey, American front porch swing writers who write books I'm supposed to fully identify with, because I'm an American with a front porch. Guess it just doesn't work that way.

I did like was the concept of her previous The Ladder of Years – the one about the middle-aged hausfrau who picks up and leaves her life and family because she feels she's taken for granted. Then, when the police arrive and ask for a description, her husband can't recall the color of her eyes.

OOF. Punch to the gut.

When the character's on her own I like her. She gets her own apartment, a cheap hovel that's all she can afford on her minimum wage salary. She's come down far in the world from where she was when her husband supported her but she's a fully realized person for the first time in her life.

Then Tyler ended it in a way that enraged me. I think that was my breaking point; with that went my last chance to connect with her writing.

And her earlier stuff, including Dinner at the Homesick Restaurant? Same thing. I finish her books thinking, what was the point of this, again? Where's the meaning? Accidental Tourist? You got it. Ditto.

That brings me to 'The Beginner's Goodbye.' I loved the cover, with "Winner of the Pulitzer Prize" splashed under those lovely tea cups. Oh, heck, thinks I. I'll give her a whirl again. It's been a while.

The premise is great. I like widows and widowers as main characters. Spinsters and whatever you call terminally single men, as well. They intrigue me, like nuns, monks, children in Victorian and a lot of YA writing and all other sorts of solitary people. Plus, theres the bit about his wife's ghost just showing up one day, walking beside him without any forewarning. I think it would have been great if I'd have just stopped there, knowing the plotline, without actually reading the book. Not really a great sign when the cover blurb's better than the book.

Oh, internets! It was funny but really light. Helium balloon light, when it could have gone somewhere real. Main character Aaron is interesting in the description. He's the editor of a small, family-run press. Until he meets Dorothy, in his thirties, he hasn't really had experience with women. That's partially because he's handicapped and feels self-conscious making friends and getting to know people. But Dorothy's a doctor. When he meets her she outright asks him what happened. She's no nonsense, honest and forthright. She couldn't care less about his flaws.

One thing Tyler captures well is Aaron's giddy feeling of love for Dorothy:

"I moved toward her as cautiously as if she were some skittish woodland animal. My feet made no sound at all. And when I reached her, I didn't speak. I turned toward the beets myself and selected a bunch of my own. We were standing side by side, so close that even a breath caused our sleeves to whisper together. I could feel the warmth that her skin gave off through the cotton. It warmed my very soul; I can't describe the comfort I felt. I wanted to stand there forever. There was nothing more I could have asked for."

She should have left out that last sentence but otherwise it's a sweetly-written passage. It flirts with schmaltzy, what with whispering sleeves and all, but I can overlook that. The tiny bit of me that allows romance to be touching felt a little stir, before the realist me squashed it with its baseball shoes.

The crux of the book is the marital relationship, what Aaron believes it is and what it really is. Dorothy dies before the two can get into it and let Dorothy air her grievances. The trouble is, that's not very well developed. It's skimmed over lightly. If there was foreshadowing Dorothy was unhappy it slipped past me. As far as I knew he really, truly loved his wife and, in her way, she loved him. Life just plodded along, dull and uneventful. Then she died and Aaron was supposed to have had an epiphany. Could have fooled me.

What sealed it all was the last bit, the final paragraph and, especially, the flaccid last sentence. It was weak before but that last bit shattered it all to pieces. I wish it weren't so, but my dear internets, it is.

The New York Times agrees with me.

Though the LA Times apparently doesn't.

And, of course, my favorite Ron Charles does!

Kirkus, likewise, is on my side.

SnapChat filters. I wish I could walk around with these things, let me tell you. Maybe not the healthiest ambition, because objects of perfection are insidious, but they're kinda fun. Ain't gonna lie.