Lest you forget this is, at heart, a book blog, I’d like to interrupt the lovely Scotland talk to briefly address my annual love-hate rant about the Man Bookers. The shortlist’s just come out, tripping the switch for my traditional snarky comments outlining all the reasons it’s utterly ridiculous.

I bitch and moan first, puffing up about THE PATRIARCHY, then wind up buying a few – if not all. I loathe myself, cry in the corner, read the books or don’t, then opine on them all. The winner I choose invariably doesn’t, triggering one last bout of bitching before I load all the titles onto my bookshelf and move on.

At worst, I’ve supported five also-rans, plus one who hardly needs my money, as they’ve won THE BIG ONE. All get stickers slapped on their covers, selling extra copies to those swayed by the reputation of the prize. Finally, CVs are updated with  “nominated for the Man Booker Prize for his/her 2018 novel FILL IN THE BLANK,” which, ultimately, winds up on bookshop 3 for 2 tables.

The romance is dead. 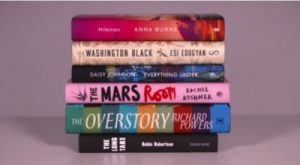 Everything Under by Daisy Johnson (UK – England) – youngest ever nominated, age 27

The Overstory by Richard Powers (USA)

Two Americans made the cut, one Canadian and three from the UK. Four of six are female. All have previously won some literary prize or other, and several have published in Very Big Literary Publications.

Richard Powers is the literary giant who could bitch-slap them all. His book is also the one predicted to win. It’s the only shortlisted title I’ve bought, though I did come damn near picking up Washington Black at Blackwell’s last week after reading the first few pages.

I think Richard Powers will win. He’s writing about trees, which sounds soporific but isn’t, because they’re at the center of every set piece in the book so far (I’m not far into it) and he just writes so damn well.

The bit that bothers me is he’d be yet another American winner. There’ve been two others in the last few years. I’m not keen on American inclusion in the Man Booker. We have our own prizes – loads of them. To see Americans dominating this prize rubs me the wrong way, and I’m American.

I’m not sure I’ll have more to say about the prize this year before the winner’s announced sometime next month. That would be a first, I know. I’ll talk about Powers’ book when I’ve finished or given up.

Otherwise, that’s all she wrote. Possibly.

2 thoughts on “That time again: The Man Booker Shortlist.”