The familiarity gained from last year’s three-month stay in Scotland’s shortened the re-acquaintance process with life here. It already feels familiar walking to the market to pick up simple things like milk and bread. There’s a small shop, a mini-mart we’d call it in the States, five minutes away. The nearest supermarket’s further than I can walk. A taxi would add a lot to the cost of buying just a few items, but there’s the British equivalent of Walmart anchoring the local mall. In that mall is, among other things, a Waterstones. I can take a taxi there when I have a longer list of needs than just vanilla and cake pans.

In preparation for making two pies with apples from the tree directly behind the house, I mistakenly bought “sponge” flour in place of self-rising, to go along with the folly of “caster” sugar in place of regular granulated, for my coffee. Thank God Chris put me in my place as far as caster sugar, since “no restaurant would ever serve caster sugar for my coffee.” As far as I can tell, caster sugar is more coarse than granulated, not so coarse as what we’d call “crystal” sugar, which is decorative. That’s used on top of baked goods to make them look more appealing and fancy, I guess you’d say.

We don’t have so many choices for baking ingredients in the States. There’s brown sugar, powdered sugar, granulated, and crystal sugar. As for flour, there’s self-rising, standard flour with no baking powder or baking soda (if you need to add specialized amounts), wheat flour, specialty flours made with other grains for the gluten-intolerant, but as far as I know, that’s it. For sponge cake, we’d use regular self-rising. If it needs a finer texture, we’d run it through a sifter. British bakers, you’re much more sophisticated.

Today I was looking at the flour and sugar I bought to stock the pantry, thinking as long as I had these maybe I should just bake a sponge cake. Exploring the kitchen cabinets for other critical ingredients, I found he had none. Add those to the list for a trip to the shopping mall. Heaven forfend I should have to go shopping, but what does what one must.

Lots of excitement two days ago, when the remnants of a hurricane barreled through southern Scotland. Growing up in the Midwest I’ve seen huge thunderstorms, but never an actual hurricane. Fascinating watching detritus hurtle past the windows, like a Scottish-set The Wizard of Oz. I half expected the Wicked Witch of the West to cycle by. I’m glad it came through so early in autumn. The leaves have only just begun changing; I’m crossing my fingers there’s no tree-baring repeat nearer peak color. I’d love to drive up into the Highlands for spectacular photos.

Colors become brilliant in Scotland later than the Midwest – between late October and early November. Colorful leaves are long gone by November in Chicago, and it’s not particularly stunning where I lived. Two charming possibilities in the Highlands are Aberfeldy and Pitlochry. I picked them out while researching hamlets with bookshops. These two fit the bill. Right next to each other in Perthshire, they’re approximately an hour and a half away. Chris mentioned Perthshire as a beauty spot. Cross fingers the weather cooperates.

I can’t escape without admitting the number of books I’ve bought so far – in just over two weeks. It’s not staggering – well, maybe to a non-reader – but decent. Charity shops netted me a few finds, but Amazon.co.uk has been no slouch, either. Considering a blog devoted to Ian Rankin’s Rebus series, I found several here and there. Edinburgh is his home town; no worries about finding all the volumes. 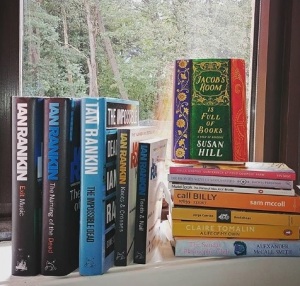 I may have picked up a sequel to Cold Comfort Farm I never realized existed, as well as the same Bloomsbury edition of The Brontës Went to Woolworths I used to own, once upon a pre-Scotland purge. Then, there’s Claire Tomalin’s autobiography, a book by an up and coming Edinburgh author named Sam McColl, Alexander McCall Smith’s first book in The Sunday Philosophy Club series, a book about bookshops, and The Prime of Miss Jean Brodie for a book discussion group meeting in Edinburgh. And no, you may not see my Amazon shopping cart.

Speaking of the book group, I attended my first meeting last evening at a lovely little cafe called Nom de Plume on Broughton St. in Edinburgh. Jean Brodie provoked a brilliant discussion, and I was very interested in hearing what actual Scots thought about this iconic title written by one of their iconic writers. All sorts of fascinating points were brought up, lots of bits and pieces I’d never have picked up on my own. This is the wonder of book groups.

I’m looking forward to the weekend, hoping it brings travel – weather permitting. A Scottish author and friend recommended a couple of abandoned sites I’m keen to see. One’s an old manor, the other a railroad tunnel no longer in use. The manor sounds delightfully creepy, though potentially dangerous. There are beams perilously near falling, and a staircase in the same condition. She warned of drop offs, so if you don’t hear from me again, you’ll know why. It’s Chris’s chance to wander off, whistling innocently.

I’m still working out adding photos without the Windows snipping tool, and I have some lovely ones to show. If I must, I’ll post those separately. If you see photos in this post, I was successful. Yay!

If not, they’re coming. Gives you a reason to keep living.

5 thoughts on “Daily Scotland: Settling In”