I’ve become one of the cheapest people I know. I have the lowest cell and internet plans, buy my clothes either thrifted or at the cheap stores, and I try to keep my grocery bills under $ 40/week. It was $ 30, until I realized that wasn’t sustainable. There’s always some non-grocery item, like laundry detergent or shampoo or a new dog toy, that rolls me into the next ten. So I upped it to release myself from the guilt.

Isn’t that cheating, you ask? I don’t need your attitude, Judgey McJudgekins. You’re not the boss of me!

When the Olympics rolled around, I had to either cough up the extra cash and buy an upgraded TV package or totally miss the action. I love the Olympics, so I bought the package. I’m now paying double, but when you’re doubling $ 20/month it’s still way cheaper than cable or satellite. It’s a mere one-week’s groceries! And, when that torch is extinguished I’ll have my finger on the button ready to take it back down to bare bones again. I hardly watch TV, anyway. I don’t need no fancy plans.

Since the upgrade, the TV’s been on NBC every minute I’m awake. Don’t remind me what that will do to my electricity bill. Yesterday I saw ski jumping, speed skating, hockey, and about 500 hours of curling.

Yes, curling. It’s kind of transfixing. I like the gentle glide and release of the stone, the sound of the sweeping. It has that weird brain effect on me, like hearing pages of a book turning, a gentle whish! whish! whish! that makes me feel all safe and comfortable.

And you’re judging me again, aren’t you.

Did you know the stones used in curling come from an island in Scotland? Well, now you do! They come from Ailsa Craig in the Firth of Clyde, which is up for sale (Ailsa Craig, not the Clyde), or was as of 2013, according to Wikipedia. You could snatch this baby up for a mere £ 1.5 M back then, and totally clean up selling curling stones!

Ailsa Craig: I’d totally buy it if I had the money.

Lest I sound thoroughly lazy, in between events I put this together:

The package had been sitting in my hallway about two months, so I’m feeling totally great about myself right now. Plus, it was the first time I’ve put together both a drawer and hinged door. Never mind the drawer has to be jiggled and coerced to close, and the door isn’t quite flush. I pronounce it adequate, per my family motto:

When my son came over for dinner, I even got my chair assembled with no effort on my part. It was done in exchange for pizza and the editing of his student teaching application: 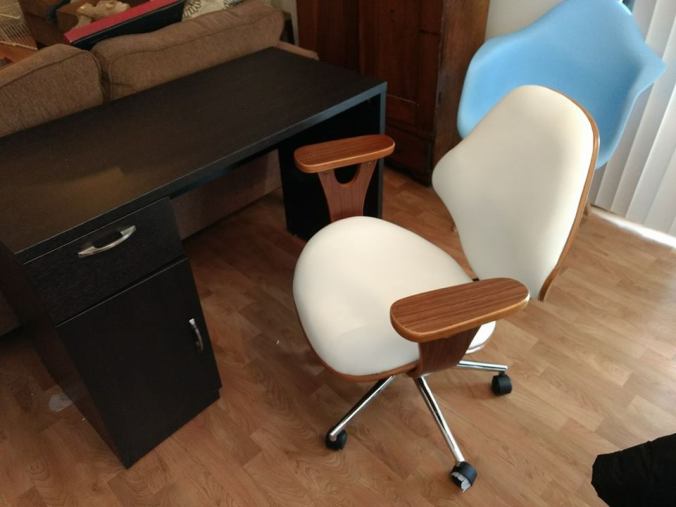 Not a bad deal. If I’d have attempted it, judging from my success with the desk, I’d have a broken tailbone by now. I’ve had quite enough injuries for one year, thanks.

Speaking of Scotland and Scottish sports: Muriel Spark. She may never have visited Ailsa Craig, but she was from Edinburgh. This qualifies as your segue.

Also, Mary Shelley spent a good deal of time in Scotland as a child. Family friends from the Dundee area hosted her regularly, partly because she couldn’t stand her step-mother. The poor child despised her father’s new wife so much she developed a strange arm pain that’s never really explained in the biography – mostly likely, it was psychological.

Godwin, of course, should have been more discriminating; this woman, who might have had made a tolerable companion to the ordinary man, felt her inferiority and in her muddled way compensated in doing all the damage she could. She left her mark on Godwin, on his children, and on her own children.

Her biological mother’s death would cause Mary a lifetime of guilt and a sense of desertion – a very sad thing. Her father, earlier in life strongly against marriage, couldn’t bear being alone after his first wife’s passing. For one thing, there were the children to be considered. Not considered all that well, apparently. He wooed and married his next-door neighbor. Convenient, I guess, if not particularly advisable.

Frankenstein, or the Modern Prometheus (1818)

The Fortunes of Perkin Warbeck, A Romance (1830)

Spark’s book asserts Frankenstein stemmed largely from a sense of alienation Mary felt, partly because she missed her mother and partly because her father shunned her after she moved in with the already married Shelley. The only reason Godwin kept in contact was to ask for money. What could make a young woman feel more used than that. If this novel is partly autobiographical, as Spark asserts, this would make Mary the monster.

What hopes for the future she entertained were not passionate ones but were none the less forceful in a practical, driving and obstinate way; for she was not allowed to vegetate: the battery of misfortune which had seemed so peculiarly to have singled her out, still held her marked; but as she had come to expect less of life, so she was less prone to disappointment. – Muriel Spark, Mary Shelley

The last decade of Mary Shelley’s life was plagued by illness. She would die, age 53, of a brain tumor. A sad – and premature – death for a woman so beset by tragedy.

The rest of the Spark biography contains deeper criticism of Shelley’s works, specifically for my purposes, Frankenstein. I’ll talk about that more as I’m reading the novel, which is the next course in my reading meal.

I’m still not ready to talk about The Ballad of Peckham Rye. I’m not quite finished, and need time to cogitate its complexity. Again, it’s a very funny book, but deep in meaning. Yes, I know I promised I’d talk about it this weekend. Mea culpa.

Blame it on the Olympics.

So, strike off another Spark book for me: the bio of Shelley. I recommend it, though it doesn’t go into the depth I’d hoped. If you’re looking for something more comprehensive, try a different title. I would and gladly, if I had the time. My schedule’s just too tight.

My goal was to get a general idea of Mary Shelley’s life before heading into Frankenstein. I accomplished that, so I’m happy. Next up, finishing Muriel Spark’s The Ballad of Peckham Rye and starting on The Bachelors, all queued up and ready to go.

At the end of March I’m hoping to write up a quarterly review, thoughts on three months’ worth of reading books by and about Muriel Spark. I’ve blown through these books so quickly, my primary intent to get through all her novels in 2018. This doesn’t allow for much absorption or contemplation. A quarterly review should help.

Have a lovely weekend, what’s left of it where you are.

2 thoughts on “Muriel Spark on Mary Shelley, and the sport of curling”

Felt very tired this evening but once I started assembling Friday's bento box I perked up.