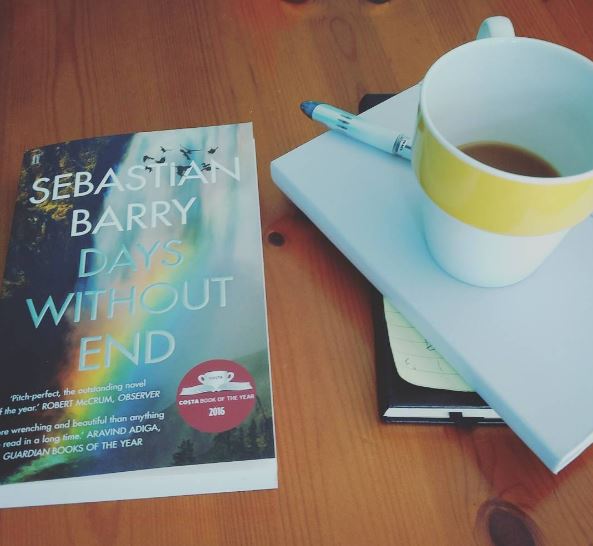 My distraction throughout the reading of Barry’s book is no reflection on it, nor its quality. The same happened when I read Graham Swift’s Walter Scott-nominated Mothering Sunday, though in reading back through a second time I was moved by its beauty.

The inability to fully fall into Days Without End is about my current life situation. There’s not even the slightest correlation with the book itself.

Sebastian Barry has been one of my favorite writers for years. If you search through my posts you’ll find many a review, an interview, and accounts of author events during which I met and heard him speak. I own a few Barry novels personally inscribed to me, with my usual odd inscription requests. Sebastian Barry is a very good sport. He’s also, in my opinion, the finest Irish novelist alive today. Biased, but true. Biased because it’s true.

DISCLAIMER:  a few years ago I exchanged a few emails with Sebastian Barry about the heavy Irish influence on the literature of the American South, even sent him a book on that specific topic as well as my favorite book by William Faulkner. While I don’t consider this review compromised as a result – because I’m a reviewer who strives to avoid bias – I must disclose my potential relationship, however tenuous, with this novel.

We’re stopped in our charge and kneel and load and fire. We kneel and load and fire at the side-on millipede of the enemy. Our batteries belch forth their bombs again and the Confederates balk like a huge herd of wild horses and run back ten yards and then ten yards reversed again … A frantic weariness infects our bones. We load and fire, load and fire … Then with a great bloom like a sudden infection of spring flowers the meadow becomes a strange carpet of flames. The grass has caught fire and is generously burning and adding burning to burning. So dry it cannot flame fast enough, so high that the blades combust in great tufts and wash the legs of the fleeing soldiers not with soft grasses but dark flames full of roaring strength … The quiet are in their black folds of death.

Barry’s latest novel is an anomaly. Rather than an Irish setting, he’s chosen the American South during the period of the Civil War. His main characters are two cross-dressing men (initially forced into the situation for reasons of survival, when they were paid to act as females hired to dance with miners in the American West) whose relationship hints at homosexuality (see video below re: Barry’s youngest son, whose coming out inspired this novel’s main characters). The two are drafted young, become brave fighters, and are humane and kind men who adopt a young Indian girl to save her.

The style of the book is, trite as it sounds – and I hate using this term – Faulkner-esque. Native to the great American writer’s “postage stamp of soil,” an admirer of his works, I can say that from the standpoint of, if not expertise, at least familiarity. His characters are huge, larger than life. The prose, after a not quite typically lyrical Barry beginning, takes off and soars toward the middle and does not relent through to the end. It flows into a gentle stream of consciousness at times, particularly in the battle scenes. Like Faulkner, Barry does not shy away from issues of grave injustice and inhumanity inflicted by whites on the indigenous and black races.

We taste in our mouths the terror of this place like it were bread of a kind … You got to stop your hands gripping your musket so tight you strangling it. Try to breathe easy and pray the moon won’t show. All the black night we think our private thoughts and then at dawn light touches everything in its kingdom. Tips against leaves and strokes the faces of men.

Unlike Swift’s Mothering Sunday, Days Without End depends heavily on the time period in which it’s written. Using the largely Scots-Irish settled American South, it explores the richness of its immigrant heritage, as well as the period of expansion just prior to, and then during, the Civil War itself.

Days Without End won the Costa Book Award. It fully deserves the Walter Scott, as well.

The moods of Timmy.