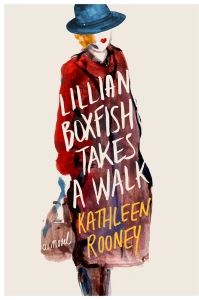 It’s New Year’s Eve 1984. Once the most celebrated poet and highest paid female advertising writer in America, Lillian Boxfish is now 84 years old, her fame forgotten. Most of her friends now dead, she’s left only with the resonance of a once-glittering life in Manhattan. Realizing her age makes it possible she won’t see another New Year’s Eve, Lillian’s mood is a mixture of nostalgia and appreciation for the rich life she’s lead. Still fit and an inveterate walker, Lillian walks Manhattan Island, the sights and sounds of New York City triggering the remembrance of things past.

Kathleen Rooney tells Lillian’s story through flashes forward and back, pursuing ongoing chronological narratives to flesh out her main character’s backstory. It’s a Mrs. Dalloway-esque blueprint, one day in the life of a woman with a specific agenda, her focus derailed as memories rush in on her.

Lillian Boxfish is an effective novel,  striking just the right note of pathos without condescension. For a writer so young, Rooney achieves both boundless empathy and realism so striking she’s wise beyond her years.

If there’s fault to be found, it lies in the editor’s reluctance to excise non-essential scenes. Padding that doesn’t advance the plot puts space between reader and story. It’s one of my personal pet peeves, the bane of contemporary writing. It’s right up there with the three-quarters slump, when a writer either brings a story to a satisfying climax or gets lost in the woods. Many a book has been ruined by a writer who forgot to bring the bread crumbs.

Lillian Boxfish could have been streamlined, should have been fifty pages shorter. Still and all, it’s a good read. Imperfect, but enjoyable.

I love novels stories about older people digging into trunks stuffed with memories. As a child I had an elderly friend, a woman who lived a block away in a huge turn of the century home that could have stood a lick of paint and cosmetic repair. Popping in and out when the spirit moved me, we mostly watched soap operas, chatting a little, then I flew off back home again.

I gave her the gift of a young person’s stories, rattling off tales of my mostly uneventful life. Never having children herself, I was her surrogate grandchild. As a high school student, I brought her pictures and stories about trips I took to Europe as a student ambassador. She’d never gone, and never would. My experiences were the next best thing, her vicarious world tour. I was her young Lillian Boxfish, all my life ahead.

When she died, in her late 90s, I hadn’t visited in years. After graduating high school and going away to college, time slipped by. I have no doubt she understood, though it doesn’t eliminate regret. Life’s filled with them. We forget each other too easily. It’s only now that Kathleen Rooney plucked that string that I remembered.

Lillian Boxfish and novels like it remind us that lines on a person’s face suggest stories untold. A person’s public face is a mask that doesn’t reveal experiences they’ve had, but there isn’t one, single person who’s not lead an interesting life. Not one, single person without stories that would astonish you.

The people Lillian passes on her walk see either a refined elderly woman or nothing at all, because once a woman’s past a certain age when sexuality is no longer relevant she slips past, unnoticed. Once upon a time she was celebrated, toasted, desirable and desired. Now, near the end, her lovers are dead and her fame past. What endures are her memories, the stories she could tell if someone would stop to hear.

Kathleen Rooney hits the mark, strikes just the right chord. Her novel is the winding down of the life of a character who’s accomplished great things and achieved dizzying heights. It’s poignant and celebratory, at the same time, which is just as it should be.

A bit over-long, yes, it’s that. But sometimes that’s a forgivable sin.  When a book makes you feel, it’s done its job.