For all that 2016 was a shite year in general, reading-wise it was actually pretty great. Though I didn’t finish as many books as I’d have liked, only 50ish, the majority were above par. Loads of top-notch writers published new books, literary award offerings were impressive, and I scored more review copies than I could possibly read.

Irvine Welsh and Robert Olen Butler were the only two writers I met, the only two author events I attended. Ah, but they were lovely. 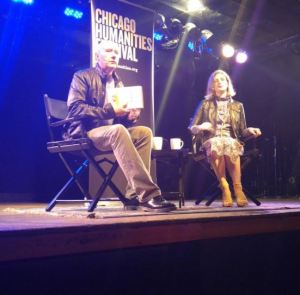 My modest goal is to post a brief summary of my best books of 2016, and when I say brief I’m not kidding. As always, I hope the next year finds me posting to Bluestalking much more regularly. What I lack is not material, but organizing and planning posts.

I didn’t keep perfect track of my 2016 reads. I’ve been spending the past two days trying in vain to track down what I’ve read this year, a futile and irritating endeavor that’s left me frustrated. Very few books made it to Bluestalking for review. Several made it no further than Amazon, and I haven’t even looked at Goodreads.

It is what it is. I need to bring this reading year to a close, then hitch up my trousers and vow next year will be different.

Enough blathering. Let’s get to it.

My Official, Very Best Reads of 2016, in no particular order:

2017 was my year of all things Bronte, spurred by the 200th anniversary of Charlotte Bronte’s birth. The Bronte Cabinet is a study of the family through objects owned or relevant to them, and a fascinating exploration of their lives and the Victorian era.

McCarthy’s been on my reading list at least fifteen years. Outer Dark was my gateway into his works, and did not disappoint. It’s dark and troubling and lovely, one of the true novels worthy of the description “Faulkneresque.”

Katherine Mortenhoe is dying in a post-death world, and a reality television producer sees her as a cash cow. The reporter assigned to cover her last days finds himself caught between a lust for the glory of fame and human compassion. Written before the age of reality television, this novel’s prescience makes it an especially relevant novel.

Prior to a planned visit to Scotland, I wanted to research a bit more about Scottish writers. RL Stevenson is one of the giants, and this work tells the history of his family’s instrumental contributions to lighthouse technology and how they changed the landscape of Scotland.

Agostino is the story of a 13-year old boy’s budding adolescence and sexual awakening, as well as the simultaneous and horrifying realization the madonna-figure mother he adores is also a sexual being. A disturbing, beautifully written book.

So winds up my 2016 year in reading. Far from doing it justice, at least I’ve made a stab. You’ll just have to trust me. As far as books and reading, it kicked some serious ass.

On to 2017. Wishing you all well, and hope your reading last year and next is simply magnificent.