Not heavy on literary events, 2016, though I’m rather proud of the lengths I went to in order to see Stephen King. It involved ten hours of driving, then five hours broiling on a sidewalk in the Louisville heat like a toad in a frying pan, dehydrated to the point I was near-hallucinating by the time I fell into my seat in the shade of the pavillion.

Never have I come so near weeping at the sight of an ass-breaking plastic seat. It shone like a lake in the desert. If I’d had any fluid left in my body, I’d have wept.

There was Irvine Welsh, as well. Not as dramatic an approach, but one hell of a fun evening. There was beer, laughter, moments of insight into the human condition as it applies to Scotland and universally, and one of my favorite author inscriptions ever.

Few but mighty, my 2016 literary functions.

Earlier this week, I had the opportunity to meet a writer native to the state I’ve called home since the age of three. Robert Olen Butler, Pulitzer winner for the story collection Good Scent from a Strange Mountain, was born in Granite City, IL on January 20, 1945. His father an actor and theatre chairman at St. Louis University, Butler worked in the steel mills, equally at home with artists and blue collar laborers. 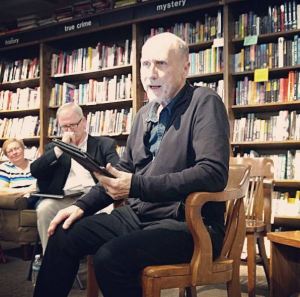 Robert Olen Butler and I have been as tight as any two Facebook connected strangers, lo these past couple of years. We’ve had our share of “Likes,” mostly mine in response to his posts. But who’s counting.

Not long past knee surgery, Butler’s currently engaged in a multi-nation book tour. When I saw he was coming to Milwaukee, I thought here’s my chance to meet him in person. It isn’t a long drive to Milwaukee, only an hour and a half or so. It’s also a very pretty route, if you avoid the expressways. There are many less pleasant ways to spend early autumn evenings.

Arriving at the venue, Boswell Book Company, like any 21st century being worth my salt I checked in via Facebook. Self-satisfied as likes began coming in fast and furious, I settled into a ridiculously comfortable leather chair in the front row, opening a review book to get in a bit of “work.”

Roughly ten minutes later, Robert Olen Butler himself strolled by, greeted me by name, shook my hand and chatted with me. Because he’d seen my post, in which I’d tagged him, of course.

Following a 37-minute reading from his new book, Butler and the moderator – a former writing student of his, now professor of English – spoke about what it means to be an artist, from where inspiration springs and briefly covered Butler’s career. The author of a couple dozen novels, several collections of stories and one book on the craft of writing, Robert Olen Butler admits he doesn’t fit easily into any genre, that in fact hardly do any two of his books seem to have been produced by the same writer.

“To be an artist means never to avert one’s eyes.”  – Akira Kurosawa, as quoted by Robert Olen Butler.

They discussed how art comes from the creative unconscious, from “mucking about” in the mind with life’s big ideas and concepts. Butler’s own assessment is all art is about yearning, all fiction about yearning challenged and thwarted. We use politics and religion and race to define ourselves and justify our actions, but in the end it’s all about finding our place in the Universe.

As Butler said, “It’s about waking up every morning asking, “Who the fuck am I?”‘

When you think about it, he’s nailed it.

With his Pulitzer-winning Good Scent from a Strange Mountain, he took somewhat of a risk speaking in the voices of multiple Vietnamese first person narrators, set in Southern Louisiana. During his service in Vietnam, Butler became enchanted, falling in love with the country and people.  Having learned the language prior to deploymen, he talked about wandering the side-streets of Saigon, solo but unafraid, armed only with his ability to communicate.

Moderator: What’s it like being such a lauded author?

His newest, Perfume River, returns to the same themes as Good Scent:

“His new novel, however, plays it straight. Though compact, the book ­ranges widely in time and setting to trace the effects of war — primarily the Vietnam conflict — on several generations of a New Orleans family. Butler’s Faulknerian shuttling back and forth across the decades has less to do with literary pyrotechnics than with cutting to the chase. “Perfume River” hits its marks with a high-stakes intensity. ” – NY Times

As inspiration for his Cobb series of mystery/thrillers, Butler took a collection of fifteen postcards, written between 1906 and 1917, and chose one voice: a man writing about President Woodrow WIlson’s 1914 invasion of Mexico. From that piece, he was contracted to write three novels, historical espionage with a “backbeat of suspense,” as he describes them. He’s currently working on the latest in the series, titled Paris in the Dark. 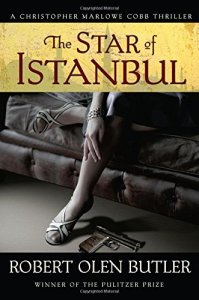 Endlessly inventive, in 2014 Butler shared his writing process through the creation of a short story, shared live in seventeen two-hour YouTube videos. That’s thirty-four hours of writing instruction given by a Pulitzer Prize-winning writer. He describes it as “like watching paint dry.” I doubt that.

I followed him on Facebook when he was engaged in the project, but I’d entirely forgotten about it. Of course I want to watch them, and of course it’s easy to vow I will. I still may, now that he reminded me.

I’m so glad I peeled myself off the sofa for the drive to Milwaukee. I’ve not regretted a single author event I’ve attended, it’s just easier to stay put than drag yourself out the door. But every writer has wisdom to share, and I’ve never met one who wasn’t generous and kind, happy and willing to answer questions you know they’ve been asked hundreds of times.

It’s always worth it, every one.

Art does not come from your head. It comes from the place you dream.

2 thoughts on “Art Comes from the Place You Dream: An evening with Robert Olen Butler”