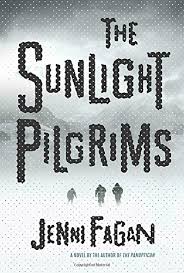 The Sunlight Pilgrims is Fagan’s second novel, following her much-lauded The Panopticon, a novel about a teenage girl named Anais who, following a childhood spent bouncing between dozens of foster families, is sent to a live in a home for chronic young offenders. Anais’s arrest record is long, including hundreds of offenses. Thrown together with offenders of all stripes, The Panopticon tells the story of a group of equally damaged young people who form a family of sorts.

The second novel is always difficult and I certainly found that to be true. I had to ignore what anyone else thought to a certain extent. I knew it was a risk in some ways to write a novel that was quite different to my debut but there is not point to writing for me, unless I am willing to put something on the line, emotionally, intellectually or otherwise. I loved spending time in the world of The Sunlight Pilgrims, it was difficult and challenging but I wanted to be there.

The Sunlight Pilgrims, similar to her first book, features a main character struggling outside the mainstream, this time a transgender teen who’s reinvented himself as a girl named Estelle/Stella. Prejudice is a large part of Stella’s experience, as classmates in the fictional small village of Clachan Fells in the Highlands of Scotland cast her out, lifelong friends turned vicious enemies.

It’s the year 2020,  global warming now a dangerous and lethal force threatening to freeze over the globe. An iceberg the size of a house drifts into the bay at Clachan Fells, locals equally transfixed and terrified about what it portends. Snowfalls creep up the sides of homes, burying cars and killing people through white-out storms, as temperatures plummet below – 48 F. Local emergency facilities are set up, villagers scrambling to keep each other alive.

In the midst of the chaos transpires the inevitable conceit of a love story. Tall, dark and handsome Dylan MacCrae, whose mother had bought a caravan in this remote village for reasons he doesn’t immediately understand, moves to Clachan Fells following the deaths of both his mother and grandmother, in rapid succession. Carrying their ashes, he leaves behind the family movie theatre that’s gone bust, looking for a new life in Scotland.

Immediately  he and Stella’s mother fall in love, to the great joy of Stella, who wished this from the moment she met their new neighbor – a conventional, “fated” moment allowing for some rather cringe-inducing prose:

Dylan tries to be subtle about watching Constance, but it is compulsive. It’s like watching a fire. She is the fire and her daughter the wind – howling long the rooftops, rattling at his windows all last night, warning him she could blow his house down and it is not a house, it is a caravan – d.e.n.i.a.l.. It’s not a river in Egypt, that’s what the kid would say.

It’s like Wuthering Heights, only cheesy. The land is windswept and menacing, the handsome man insanely in love with the beautiful woman on first sight. Then Fagan starts writing high-flown prose about love, and it all falls apart. As dramatic writing, it doesn’t work. As dramatic writing with an attempt at humor thrown in, it’s like watching a train wreck – or reading about one, in this case.

The killer winter is terrifying, but at the same time there’s a certain beauty to it. Aside from the awesome iceberg, the illusion of a triple sun – known as a “sun dog” – thrills the small community. As there’s nothing to be done to prevent the weather, the villagers flock to see this natural phenomenon, the one literal bright spot in the ever-increasing dark of a long, lethal winter.

If the world is going to end, they may as well take in the awesome spectacle in the time they have left.

Sun Dogs – illusion of three suns appearing in the sky

Despite ominous threats to the lives of the characters , the plot is disappointingly lacking in urgency. What she does well is interweave complex plot lines, juggling multiple characters and their stories. What she doesn’t do as well is pull taut the strings, to maintain forward momentum. She left room for just enough sway to let the reader’s attention drift – the crucial dividing line between a good novel and a great one.

Fagan also descends into moments of purple prose, overwritten passages that derail the book. The world around them is doomed, yet her characters at times bounce around like Tigger. The effect is jarringly inconsistent. This is not quite a romance, not quite post-apocalpytic, lacking definitive purpose.

The Sunlight Pilgrims could have used one, last really tough edit which it unfortunately did not get. In the end, the support structure just wasn’t there. Maybe there was too much pressure to produce a great second novel, maybe she felt rushed. Whatever the reason, The Sunlight Pilgrims is an okay book with moments of very good prose, just not enough to tip the balance.

Department pumpkin carving contest! I chose poorly and wound up with this super-thick rinded pumpkin. It was tough to cut through - wow! So I went super simple.