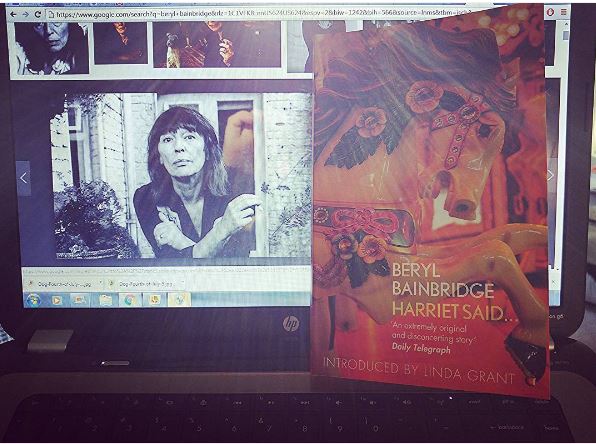 A chilling tale, Harriet Said… by Beryl Bainbridge explores the dark side of adolescence, the very particular point at which childhood morphs into sexual awakening. Two 13-year old girls: thin and lovely Harriet, and an unnamed pudgy and unattractive narrator who’s never named, live in Merseyside. Returned from boarding school, the narrator resumes her traditional role as sidekick and adorer of the beautiful Harriet, groomed to serve and carry out the whims of her friend.

Desperate to keep her friendship and approval, the unattractive girl would do absolutely anything. Slave to her idolatry, the narrator cannot oppose the prettier girl. Even when she determines to defy her, one look a the girl’s pretty face stops her in her tracks. She becomes powerless.

Following what Bainbridge subtly depicts as the sexual assault of Harriet, the girl turns into a menacing, creeping creature bent on wreaking as much havoc as possible by leading men astray. Her particular prey is a 56-year old man the two girls refer to as “the Tsar,” a man named Mr. Biggs who lives in their village.

By no means faultless, the Tsar is goaded into beginning an affair of sorts with the narrator. Alternately teasing and ridiculing him, the two girls arrange to meet him in out of the way places, presenting him with the opportunity to engage in lascivious behavior with the child. And when he takes the bait, that’s when Harriet’s true evil rises to the surface.

The two perpetrate increasingly horrendous acts on both Mr. Biggs and his wife, a hulking figure of a woman who sees right through them. The cruelty and level of cunning accelerates as the narrator is persuaded to take the baiting even further.

“Harriet spoke in the same reasonable way she talked to her mother.

‘At thirteen there is very little you can expect to salvage from loving someone than experience. You’ll go back to school for years, you’ll wear a gym tunic long after this is over… And all he’ll feel for you is a sort of gentle nostalgia. No – bring it to its logical conclusion. If you don’t you’ll feel emotional for ages over something that was pretty trivial.’

‘But what if we find it’s not trivial?’ I was appalled by the wisdom of us both. It seemed unnatural. Why had I not noticed it before?

I knew the book would be dark, but had no idea to what extent. The horror is paced well, building to the inevitable and brutal end by degrees. The thing is, I cannot say much more about the plot without risking the spoiling of it. The book’s quite short, at 175 pages, which doesn’t leave a lot of room for discussion without giving too much away.

I thought it was brilliantly done, though I enjoy dark writing. I’ve read other Bainbridge, though it’s been several years, and I remember her other stuff is similar to Harriet Said… I expect it’s something you either like or don’t. I fall quite firmly into the like camp.

Stories about the potential for brutality in adolescents aren’t rare. If you’ve been 13 you’ll understand why. It can be a nasty age, with all those hormones raging. Of course, not everyone is Harriet – and thank God for that.

It’s at this age children become narcissistic, rebellious and downright nasty – to different degrees, of course, and not universally but to a large extent. Thankfully, for most it’s a phase. Just sometimes, it’s taken to a fatal extreme. It’s in this dark place Bainbridge set this novel.

A dark delight, once started it demands you don’t put it down. Morbid fascination carries the reader along to the end we both know and hope isn’t inevitable. And Bainbridge does not flinch. She takes it to the bitter end, all innocence lost.

Now I know why I’d meant to get back to her writing. I enjoy the shiver of it, the dark recesses of wickedness. A wonderful short novel. Highly recommended.

Very happy with how my bathroom turned out. Liking the all white thing. #my1914home #bluestalking