It seems this novelization has lots more hard information than I’d given it credit for. At the very least, it’s giving me lots of bits about the Brontës I’d forgotten about.

Branwell’s temper tantrums – I give Patrick much credit for dealing with his son’s often explosive behavior. When things didn’t go his way, the boy could be quite a little monster. The girls learned to tip-toe around him when he was in one of his moods, and their Aunt Branwell, after whom the kid was named, made no secret of her advice: send the boy to boarding school!

“Backward I look upon my life,
And see one waste of storm and strife,
One wrack of sorrows, hopes, and pain,
Vanishing to arise again!
That life has moved through evening, where
Continual shadows veiled my sphere;
From youth’s horizon upward rolled
To life’s meridian, dark and cold.”
― Patrick Branwell Brontë

Incidentally, later in life Branwell would go on to become a painter, producing such works as this:

The horrors of Cowan Bridge School, that hellish and brutal establishment of learning whose draconian ideas of discipline and abnegation indisputably hastened the deaths of Maria and Elizabeth Bronte. The institution’s neglect and inhumanly harsh forms of discipline were criminal. The deaths of these girls, as well as many others, are on their hands. 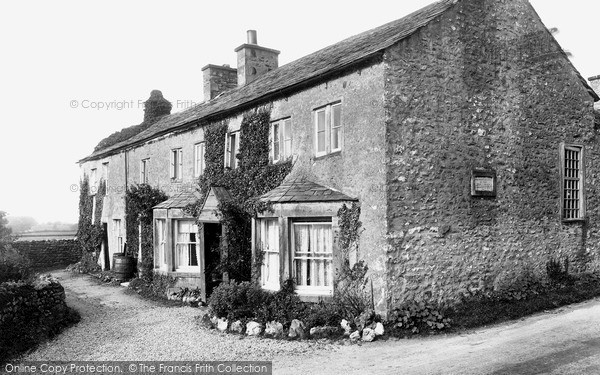 These were wonderful, kind and intelligent young girls! That their lives were cut short at the hands of the beasts at Cowan Bridge is abominable. Even if the school did undergo drastic change following dozens of deaths from typhus, due in large part to malnutrition and absolutely freezing conditions, still these children gave their lives for nothing. The girls were mocked, starved and forced to undergo privations totally innappropriate for their age – perhaps any age.

No wonder the guilt lay so heavily on Patrick Brontë’s shoulders.

[Charlotte] used to speak of her two elder sisters, Maria and Elizabeth, who died at Cowan Bridge. I used to believe them to have been wonders of talent and kindness. She told me, early one morning, that she had just been dreaming; she had been told that she was wanted in the drawing-room, and it was Maria and Elizabeth. I was eager for her to go on, and when she said there was no more, I said, ‘but go on! Make it out! I know you can!’. She said she would not; she wished she had not dreamed, for it did not go on nicely, they were changed; they had forgotten what they used to care for. They were very fashionably dressed, and began criticising the room…

The Brontë children’s delightful, endlessly creative writings and miniature books –  no surprise these children were clever. From a young age they began writing plays and stories, invented imaginary lands and wrote and assembled these little books:

The insular life of the children – they were each other’s favorite playmates and companions, not mixing so well in society. Aunt Branwell noted, upon leaving a party  to which the whole family had been invited, how the children were mute during the event but immediately laughing and gamboling about the instant the door closed behind them.

Patrick Brontë could be very weird ass – he had a great deal of trouble relating to children, spending much of his time completely isolated from his own brood. He was also in the habit of keeping a loaded pistol in his room at night, for safety, discharging it out his bedroom window every morning.

Shooting a pistol out his window. Every morning. With small children in the house.

The children read widely, their books completely uncensored – Lord Byron was a particular favorite of Charlotte’s, who reportedly blushed to read some of his more salacious passages. I’m beginning to see hints as to how these children went on to produce such sexually charged works.

And Charlotte may have been a very saucy thing, indeed. From a letter by the author:

“If you knew my thoughts; the dreams that absorb me; and the fiery imagination that at times eats me up … you would pity and I daresay despise me.”

I honestly don’t doubt it. But no, not pity or despise. Rather, find compelling and more than a bit interesting.

There’s so much to be known about the Brontë family, and reading this novel is re-opening my interest. It’s a little surprising how much I’m growing to enjoy Banks’ book, and the ripple effects it’s having on my desire to learn more.

Here’s a YouTube video I’m also watching, another source of information about this fascinating family:


Getting more and more anxious to move on to Claire Harmon’s biography of Charlotte all the time. Revisiting the Brontës has been beyond a delight. The thing is, a person could spend a lifetime reading everything written by and about the family.

Such is the joy and curse of the reading life.

But mostly the joy.

One thought on “Reading Dark Quartet: The Story of the Brontes by Lynne Reid Banks”