I’m a bit miffed the moniker “bookslut” belongs to another. Jessa Crispin got to it first, growing from blogger to literary phenomenon by virtue of honest labor. It describes me so aptly, but it’s very much engaged.

I could be more involved in the Chicago literary scene. There are opportunities. Remind me next time I take aim at others who’ve done the work and gone the distance. Shut up and just do it, for Chrissake. Blaze your own, etc.

Take the Chicago Humanities Festival. I attended an event this evening at Bottom Lounge, a conversation with Jessa Crispin and Scottish author turned ex-pat Irvine Welsh. The CHF offers loads of opportunities to volunteer, and it’s but one of several.

Bottom Lounge is located under the L tracks on Lake Street in Chicago, where it’s been in operation since 2008. A popular local indie concert venue, it also hosts events such as this evening’s.

I’m not at all familiar with this area of Chicago, so I arrived two hours early.  Yes, that felt every bit as weird and uncomfortable as you’d expect. It’s the city, and it’s for cool people. I live in the suburbs, the poor cousin wearing overalls, sucking on straw. Downright embarrassing.

Like a creepy stranger cruising streets looking for vulnerable kids, I felt like a low-life sitting there alone. Keeping my head down, I ostentatiously scribbled away in a review book to look Very Busy Indeed, every few minutes checking my cell phone as if some imaginary person I was meeting hadn’t yet shown.

Inside, turns out it’s an actual restaurant with tables and a bar and normalcy. Imagine. It’s a funky part Deco, part industrial chic comfortable little place. I can imagine it lit up with musical energy, but it’s equally appropriate for literary events. 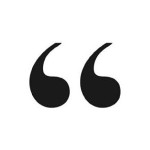 A selfish bastard’s game, writing is.

Of all they discussed, perhaps the most intriguing was how the novel of the working class has fared in this era of political correctness. “When you don’t portray marginalized people as victims, you have problems, ” said Welsh. Because “that’s not how things should operate.”

This is an age of great change.  It’s important to note, Welsh reminded, this is the first time in American history in which children will not do better than their parents. Crippled by the debt of a university education, parents mortgage their homes for children who have no guarantee that degree will ever pay them a dime. It’s a terrible situation, in which “drugs fill the vacuum.” The kids should tell their parents “fuck the degree, just give me the money!”

And he has a point.

First coming to America in his 20s, life now is far different for the ex-pat author. It’s social media that’s made the difference. It’s like he never left home, he said. With social media everything is immediate. You never miss a moment. 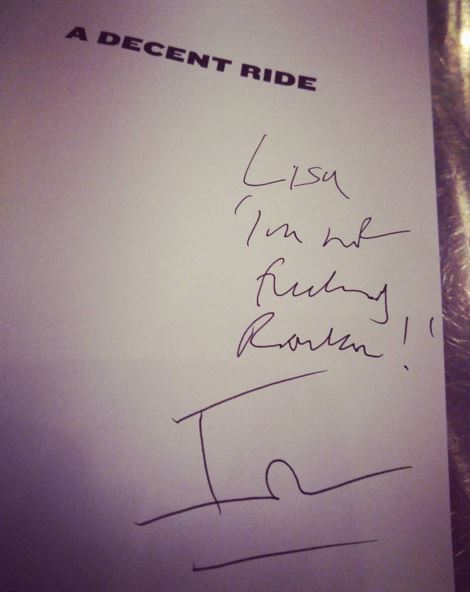 As for the usual question “what is your process,” for Welsh it’s a matter of “mixing it up.” Used to be, the image of the writer meant solitude, plugging away through the night. It doesn’t allow for life, not to mention a family, yet the 9 – 5:00 is too much like every other sort of work.  The answer: visit coffee shops, sometimes work at home, but sometimes go away, check into a hotel and refuse to leave until you’ve produced something.

If all else fails, he has a plastic dalek on his desk to scream, “Exterminate!” when he can’t think of anything.

I’ll end with a video I took, from the reading he did of his new book A Decent Ride. So much fun, so much profanity. Did I mention so much fun?

Thank you, Chicago Humanities Festival and Jessa Crispin. Thank you and I’m so sorry I was creepy, Bottom Lounge.

Thank you to Irvine Welsh, as well, for humoUring my strange inscription request.

And to all a good night.

One thought on “an evening with irvine welsh and jessa crispin, the bookslut”