HIs archenemy “Big Ger” Cafferty’s life has been threatened by a mysterious gunman who’s shot through his front window and it’s up to Siobhan Clarke, Malcolm Fox and John Rebus to save him before the killer strikes. Because next time, he may not miss.

Think what you like, I believe we fans brought John Rebus back.

Returning from over a year’s hiatus following the loss of dear friend Iain Banks to cancer, Rankin was, as is his way, actively engaging his fan base on Twitter, chatting openly about his intention to write another novel. As is my way, I and several dozen other fans were by no means subtle in our attempts to persuade him to bring back John Rebus.

As soon as I could engage him one on one, I asked Ian Rankin outright what he was planning to do. Would his next book be in The Complaints series, or would he listen to great popular outcry and bring Rebus back from retirement? Then he said those magic words…

Rebus was coming back.

Rankin, too, is a master of the long game. His first Rebus novel, Knots and Crosses, was published nearly three decades ago, in 1987. What has kept him writing the series? “I’m interested in themes and questions, and the crime novel is an attempt to look at big moral themes, I suppose. Why do we keep doing bad things to each other? Getting beneath the psyche of Edinburgh, trying to dig a little bit further below the surface of the city, and using that as a microcosm for Scotland as a whole.”

But that’s not my only connection to Even Dogs in the Wild. I gifted Ian Rankin a Moleskine notebook, shipped to his home away from home, the Oxford Bar in Edinburgh. He thanked me on Twitter, letting me know he’d started outlining Even Dogs in the Night in the gift I’d given him.  Doesn’t get better than that for a freelance reviewer from Chicago.

For so many reasons, not least the joy of knowing Rankin’s semi-retirement was over – more importantly, his broken spirits buoyed – I awaited this one with great anticipation. Keen to get my hands on it, I pre-ordered a copy from Amazon.uk as soon as it had a listing. Then I heard from his U.S. agent. A review copy was on its way from them, as well. Even Dogs in the Wild is quite special to me.

I’m doubly proud Ian Rankin came back, then totally hit it out of the park with this book. It’s so tight, so well-plotted and one of his absolute best books. Retired for two books, John Rebus has grown older, softer and unused to the grueling life of a police detective. Then comes the call he’s not completely displeased to receive: someone’s taken a shot at “Big Ger” Cafferty and no one knows the career criminal better than John Rebus.

Will he come back to lend his help to the case?

“Congratulations on your retirement,” Cafferty drawled. “You didn’t think to invite me to the party. Hang on, though – I hear there was no party. Not enough friends left to even fill the back room at the Ox? He made a show of shaking his head in sympathy.

“The bullet didn’t hit you then?” Rebus retorted. “More’s the pity.”

Of course he will. It’s Cafferty. That big bastard Cafferty. Now that Rebus is a civilian, it changes the dynamic. Though still not fond of each other, putting it mildly, Rebus is no longer a cop. He has a bit more latitude but Cafferty still has no reason to trust him. But he does need him and he knows it.

At the same time, the dynamic’s changed by the relationship between John Rebus and Malcolm Fox, the older man juxtaposed with the next generation of detective. Not just professionally but underlying it all Fox is engaged in a not quite relationship/not quite not with the older detective’s former lover, Siobhan Clarke. It lends an interesting element, one left soft focused in the background. How will Fox fare and will he succeed in filling his predecessor’s shoes? And will he put his own mark on the job. He’s also faced with a lot, personally. His father is dying, and though he realizes the finality he also does not want to let down the investigation. He’s in a time of extreme turbulence, a time of letting go and of proving himself.

It’s these interpersonal relationships that add such an emotional quality to this book. For long-time readers, the book’s a huge treat. For those who may be less seasoned Rebus fans, it features a plot twisted and complex enough to keep the tension taut. For all appearances, Cafferty’s past is catching up with him. But is that all that’s at play?

Of course not. There’s much more. A gang of Glasgow toughs are engaged in a dark battle and Cafferty’s not the only victim of violence. He just happens to be the one who survived. A former lord advocate has died violently, as has a man who’d just won the lottery. So, what’s the connection? Who’s behind this and why?

It’s a puzzle John Rebus is especially qualified to tackle. His many years’ worth of experience with all elements of this case making him invaluable to the team. We know he’ll get to the bottom of it, we just don’t know how.

I admit I’m prejudiced toward loving whatever Ian Rankin writes. Still, I defy anyone to say this is not one of his better books. It’s a testament to his mastery of his craft and ability to rise above great personal turmoil to not just come back but do so strongly. Even Dogs in the Wild says he may have been through a lot but he’s no worse for the wear. In fact, he’s stronger than ever.

Now, my lingering question is… where will he take Rebus from here? It remains to be seen but his fans are no doubt very well pleased to have had the opportunity to take this journey with him again. One day Rebus won’t be back and that fact must be faced. But, for now, Ian Rankin’s given us one hell of a gift.

Maybe if I send him another Moleskine he’ll consider giving old Rebus one more go, eh?  I’m certainly not above trying. 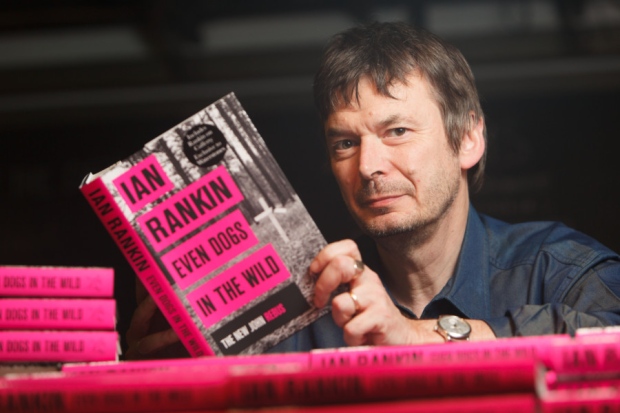