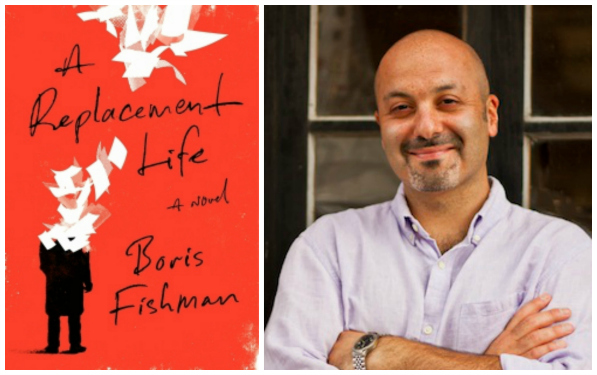 Slava Gelman is a young writer trying to get a foothold on the slippery slope from low-ranking nobody to published writer, with a byline in Century, a high-profile magazine where he works. So far achieving little respect, his ideas largely overlooked, he’s mired in frustration. If he’s to succeed, he believes he needs to break free of his barely off the boat Russian family, moving forward into modern-day Manhattan and the new lifestyle he yearns to emulate.

Upon the death of his much-loved grandmother, his adorable grandfather – a golden-hearted man thoroughly lacking principle in all matters related to money – convinces Slava he should turn his writing skills to the family’s advantage, forging a letter of restitution for his grandmother’s suffering during the Holocaust, in order to receive money from the German government. Along with the request, Slava finds himself reeled back into the bosom of the family, adding to his conflict and misery.

What makes the whole endeavor a bit less smarmy is his grandmother just missed a legitimate opportunity to apply for restitution; she missed the letter which would have qualified her by just a few days. The implied question is: is it more immoral forging a letter to get money from a government formerly responsible for the killing of thousands of Jews, or to allow this same government to get away with not having compensated the family in any way – not that money can buy back what suffering takes.

Moral or not, Slava writes the letter. In so doing, he gets far more than he ever bargained for, which you kind of have to figure or there’d be no story, would there?

Fishman’s book takes on a very serious topic, managing to sidestep the most serious offense through use of humor, mixed with a cast of characters you can’t fail to love .  Will his treatment of forged Holocaust restitution offend some readers or make Slava heroic? Tough to say.

Though I am not Jewish, I am a human being whose heart hurt reading Slava’s invented stories. Not having read other reviews of the book, I can’t say how he fared with other readers. I was borderline, finding a few more gruesome details a little too graphic for comfort. But then, as is always the case in reading fiction written by a writer representing a culture foreign to the reader, I feel a bit reluctant speaking out against his treatment. I have no notion how it feels to have been savaged at the hands of the Nazis. What I know comes from history books, films and other literature I read. My heart breaks on their behalf but I will always be an outsider.

For the most part, I found Fishman’s balance between horror and humor even. The specter of very real suffering was in the background throughout the book; it isn’t as if he moved from funny to savage with no segue. His own Russian Jewish heritage came through strongly, his heart clearly affected by the story he chose to tell.

A Replacement Life reads similarly to the books of Gary Shteyngart, funny by use of understated, ironic humor. There’s a good chance if you enjoy one, you’ll enjoy the other writer.

Russian Jewish humor has a distinctly unique inflection. Plots often verge on the madcap, heavily using old word vs. new world contrast to create distinct generational separation in characters, lending itself well to this type of humor. Older family members groan and hold their heads over new world changes in the young, invoking guilt in an attempt to bring the younger generation back to the old ways. Of course, they generally fail. Once having achieved freedom, who wants to trade it back?

“My first thanks is to my grandmother. She really was better than all of us.

Then to my grandfather. A friend once said, “You’re smarter than him, you’re more enlightened than him. But both of us can fit inside his left nut.” Hard to Argue.”

One thought on “a replacement life by boris fishman”