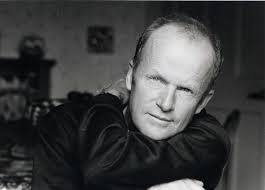 Author Jim Crace talks with Lisa Guidarini about his decision to retire from fiction writing, the biggest influences in his long and storied career, and how his novel Harvest is wrapped around timeless themes.

Harvest seems to be set in an era when English society is evolving from use of land to grow crops to enclosed pastures for animals. What about this specific time period did you find compelling as a setting for your novel? Could it have been set in any other time and place?
The time period isn’t all that specific, in fact. I wasn’t trying to write a novel that was medieval or Tudor or Jacobean. If the novel has a “setting” at all then it’s Shakespeare’s England. So it’s prose fiction based on stage fiction. But, if the exact time and location of the story are not important to me, the subject matters are. And the subject matters are timeless. Small farmers all over the world are still being forced from their land, edged out by timber sharks or soy barons or coffee magnates or housing developers. And those farmers may well end up as refugees or asylum seekers in towns or cities which resent them. So, yes, this novel could have been set in any other time or place – except for the fact that I had a local and personal reason to make it “Shakespearean.” I live in Warwickshire -“Shakespeare’s County” as the tourist board call it – only half an hour from Stratford-upon-Avon. And the fields where I most commonly walk are etched with the ridge and furrow of the ancient ploughing which stopped with sheep enclosures. I found that irresistible.

So you choose to leave the village unnamed in order to allow the story to also work as a commentary on contemporary society, and humanity in general?
Vagueness gives free rein to the imagination. I do respect the two golden rules of true historical fiction, that facts should be checked and confirmed, that writers should not impose on the past, 21st century sensibilities, such as feminism or homophilia or multiculturalism. Good luck to historical novelists, I say. But I’m not one of them. I don’t want to check or ratify anything. I want to invent and I don’t want the non-fictional truth to get in my way. My novels are paintings not photographs. And I’m not interested in writing any novel that isn’t drenched in 21st sensibilities, whenever or wherever it’s set.

The insular nature of the unnamed village was characterized by a xenophobic distrust of “outsiders.” Why is violence such an instinctive reaction in this story?
When the going gets tough, the tough get going, to quote (and misapply) the Billy Ocean lyrics. That’s to say, the tougher, more violent members of society, are always on the lookout for scapegoats, especially when there’s a shortage of work, housing or food. I live in the happily warmhearted and hospitable city of Birmingham. In easy times, there is very little tension between our various culturally mixed communities. But we’re in a recession at the moment. Many young men (and they’re the ones to worry about if you’re tracing the sources of violence) can’t find work and can’t afford their rents. Who can they blame? Who can they punch? Well, anyone with a dark face, anyone with a strange accent, anyone with the wrong-shaped nose.

Both Thirsk and Master Kent were childless – specifically, without sons – and widowers. Was this meant to unite these two characters in some way?
I’m not sure about the word meant. I start my novels with little idea of those details. I have no characters or plot or any narrative voice. I wait for the book to express itself and then let the story unfold in front of me. Narrative is giving; it does the work for you. It made Thirsk and Master Kent childless and wifeless and, as you say, it did unite them. They came to share the melancholy of men who have no one to love.

How has writing enriched your life? Has it been a compulsion, a passion that controls you, or something altogether different?
I suspect it’s less of an obsession for me than for most novelists. Maybe that’s because I’m hardly an autobiographical writer and so when I close my office door after work I am not bound to take my subject matter with me. But when I am working I am enraptured by the ancient and tested wisdom, playfulness and generosity of storytelling. That’s the enrichment I have enjoyed. But I would be foolish to think that there are not other enrichments to be discovered far from the word processor.

Were you raised in a bookish household?
I was bought up in an atheistic, socialist household by working-class parents who did not as a matter of principle reject the so-called higher arts. My mum was not a reader, though she was witty. Her genius was her hospitality and warmth. My dad was the reader. Part of his self-education involved embracing all sorts of creativity without being creative himself. He took us to the theatre, the opera, the galleries and, most important, into the countryside. None of our neighbors in the housing estate in north London where I was brought up did the same with their children. I think they distrusted my father a bit. His openness and inquisitiveness made them doubt themselves. But he was too private and self-contained to worry what people made of him. He held faith in his books, few in number, but still dear to him and now to me. He had Orwell, Steinbeck, Jack London, Shaw, Wells, all the progressive voices. And he had the classics of natural history. He read the reviews, too. And if a new novel was especially well received, he would bring it home from the library. That’s where I first encountered contemporary literature.

Are you a big reader now? Do you consider yourself a biblioholic or do you actively pursue other interests in addition to reading and writing?
I’m certainly not a biblioholic. My wife’s the one who always has her nose in a book. I’m more likely to have my nose pressed up against a pair of binoculars – or a windowpane waiting for the rain to stop.

Are you still planning to retire? And may I be so bold as to ask why? If you don’t continue to write, do you have another path you plan to follow?
As things stand, I have no plans to write any more fiction, though if the mood takes me I might write a stage play, some essays on natural history and a children’s book (called Boa). But all of that is uncertain. What is certain is that retirement for me will be marked by an increase in activity rather than a decrease. Sitting in front of a computer with no colleagues is not a healthy lifestyle. There are walks begging to be taken. I want a better garden. My tennis and my painting could improve. I have not been as politically engaged as I’ve wanted to be. There are demonstrations to attend and riots to foment. My grandson needs attention. My bike needs exercise. I need to brush up my French and my Arabic. I want to stay in bed. I think I’ll have a beer.

Once you’ve stopped writing fiction – and I hope you reconsider – how would you like readers to remember your works? What would be the most flattering thing you could hear?
I’m not interested in literary immortality. I’m enough of a rationalist (and atheist) not to care one way or the other if my books are read after my death. But there are reasons both practical and emotional why I’d be happy if my novels continued to sell after my abandonment of writing for another more communal life. I suppose the final weeks of my existence might be marginally more restful if I knew all my novels were still in print and that some of their readers recognized that, despite the dark places those books might have taken them to, the lasting tone is one of optimism.

Finally, to whom, or what, do you attribute your success as a writer? If you could give thanks and appreciation to one source, what/who would that be?
Thanks, Dad.