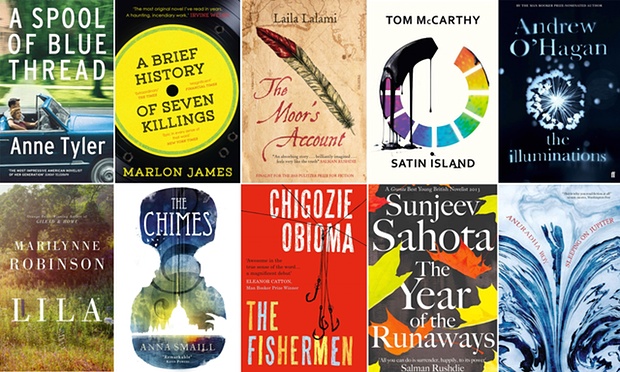 Lo, these many years I have participated in the largely futile game of guessing the Man Booker winner. I’ve had successes and failures but mostly it’s a maddening exercise in literary addiction, tinged with galloping insanity. Nevertheless, I am always happy to offer an opinion totally devoid of actual research or, really, much effort at all.

I’m always happy to do the least I can do. ™

This year’s crop of Long-Longlisters is particularly compelling. From reading the synopses, there’s only one book I would not willingly pick up and read. That book is A Brief History of Seven Killings by Marlon James, reason being I have no interest in Bob Marley or Jamaica. Rave reviews aside, it simply doesn’t appeal.

As for the others, if you know me at all you’ll expect my ejecting Anne Tyler straightaway, sending her spinning into the atmosphere. Don’t care for Anne Tyler. Don’t feel she deserves a Booker. How did she make the list? Not for her Serious Literary Qualities. Rather, because she announced she’s hanging up her pen after this last novel. And she’s beloved, for some reason or other I haven’t been able to grasp. Nothing against her personally, mind. I’m charmed by the idea of the Reclusive Writer.  Unfortunately, to me her books have always been soporific, their droning sameness lulling me into a near-coma. Her quality maintains a steady pace, churning out novel after novel featuring characters whose quirks I’m supposed to find endearing. Supposed to. Plots are fine, nothing too upsetting or too simplistic. Very mid-line. But prize-worthy? Dear God no. Compare her with, say, Margaret Atwood and it will give you screaming fits.

Laila Lalami: know of, haven’t read. Arundhati Roy, Tom McCarthy, Andrew O’Hagan: ditto ditto and ditto. Roy, McCarthy, O’Hagan: reputations quite high. Lalami, lesser but not to be discounted; up and coming. Her growing stature edges her up a notch or two.

The Short List will consist of equal parts famous, peripheral and unknown. I expect Robinson, Lalami and James will be shoo-ins. From there, it’s anyone’s guess. Really, there’s no logic here, just personal tastes of the judges. I’ve learned it’s impossible to gauge the wildcard spots, save by blind luck.

Once things have been narrowed down, pay attention to the press. Read the book reviews, the jacket blurbs. Try and put your finger on what about each book stands out, how timely it is and how well-received the author has been. Add unicorns and pixie dust, sacrifice a virgin, poke a voodoo doll with pins and spit over your left shoulder: the answer will soon become muddled but you’ll have something for Instagram, so there’s that.

I’ve no doubt it will come down to Marilynne Robinson v. currently unknown contender. Why Marilynne Robinson?  Well, have you read her work? Her prose is mesmerizing, her plots languid, her characters deep and dark and complex. Just stunning. The buzz about her is correct; she is a genius. She deserves the award based on her collected body of work, plus Lila hit it out of the park. She’s a sure bet.

BUT… And it’s a big but, the judges become irritated when onlookers shout at them for being too predictable. That is the rub. Will the judges rule according to merit or will a wildcard overtake Robinson, just at the finish? Depends on the image they’d like to project of themselves, “they” being the judges.

That’s another thing, who are the judges?  Very Seriously Literary Judges will be more apt to choose by merit alone, regardless of convention. Young and Less Stolid Judges will veer toward the wildcard, the up and comer; they long to defy the literary canon. And I haven’t looked them up, for no other reason than I’m just plain lazy. Toddle off and form your own opinions. What am I, a machine?!

If Robinson is upset, justice will be served only if the winner is a writer whose innovation adds measurable depth and breadth to literature with a capital L. In this case, we’re to consider Robinson so much a given as to have already honored her with the virtual award, handing the actual title to THE OTHER. Translation: she gets screwed and not in a fun way.

This, loves, is how the Man Booker Prize works: when it doesn’t go madly off the rails, careening to and fro like a ping pong ball smashed by a body builder, that is. All my years of following its progress, added to experience having judged other literary awards, have taught me This Big Lesson. I am now imparting it to you, anointing the Next Great Generation of Man Booker Supposers.

When the Short List’s out we’ll see how the chips fall.

Then there will be two.

Marilynne Robinson and fill in the blank…