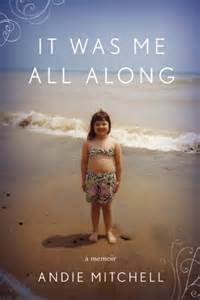 Mitchell’s book is far from my average reading genre. The memoirs I choose are generally literary: about literary figures, memoirs about reading, travel memoirs or books written in a literary style. It Was Me All Along is none of these. Rather, what attracted me to this book was its subject matter: an introspective look at how our society predicates a woman’s value based on her looks and the unique perspective of one woman’s journey to find peace in her relationship with food, within her own body and mind.

Her story is honest. She doesn’t gloss over how she wound up eating herself to almost 300 lbs., doesn’t make excuses for herself or her behavior. She shares how food filled gaping voids in her life, how the mouth-feel of a cupcake or succulent hamburger obsessed her, how her whole life revolved around her next meal while in the midst of the current one. From her description of her early life, it’s not surprising food became her mainstay. Her father, while often a kind man and loving father, was also an alcoholic, her parents prone to frequent – often violent – arguments. As he fell into an increasingly dark abyss, he began disappearing for longer and longer periods of time. Safety and stability missing from her life, all she knew she could rely upon was food. It became her only constant, one which never failed to fill the emptiness created by loss.

It’s easy to empathize with Andie Mitchell. Her story is easily followed and the descriptions of her life experiences clear and chronological. Despite her tendency toward self-conscious, overwritten prose, the self help genre is forgiving. It doesn’t matter so much how cringe-worthy some of her metaphor-laden writing is, what matters is the  information is imparted. Mitchell’s certainly good at expressing how it felt to be so large, how it hurt being teased and shunned and what about food was so appealing. Her journey is outlined well and flows easily.  When she ultimately begins to turn her life around, she tells us about her exercise routine, how she struggled past exercise addiction to a more liveable, comfortable relationship with burning calories. Most impressively, she reveals how she overcame her food addictions.

Ultimately, once she’s come into herself her relationships shift. She begins to discover who she is, what she loves, and where she’d like to go in life. After struggling so long with her body and mind, finally it comes down to what makes her happy. Ironically, food is still central. Her life-long love of baking, influenced by her mother’s own skill in the kitchen, lead her to food blogging. Now that she’s learned so much about enjoying controlled eating, she shares her insights with others, some of whom fight the same battle she’s already won.

It’s inspirational reading one person’s fight against odds heavily stacked against her. Losing and keeping off weight is usually a fruitless struggle, as backed up by statistics. Reading Andie Mitchell’s story it suddenly feels a little less hopeless. Following her advice opens new avenues to try, learning to enjoy food without guilt attached. Not only that, learning to love yourself for what, and who, you are.

While not a stylistically impressive book, this is nonetheless an effort with noble intent. There’s much truth here to be discovered.

The lovely author, herself.

One thought on “It Was Me All Along: A Memoir by Andie Mitchell”