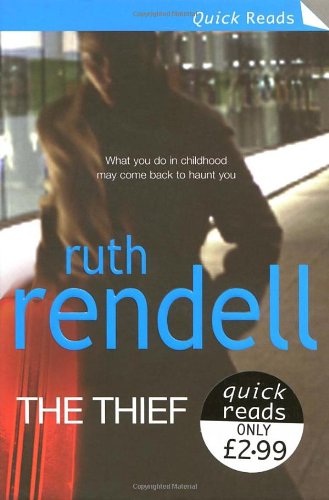 The Thief by Ruth Rendell

The Brits have so many delicious short read editions it’s not even fair.  There are the Penguin Shorts I’ve known about for years (and have been collecting) but I’d never heard of this “Quick Reads” series. Thanks to Half Price Books – and this Rendell title – I do now and the game’s afoot.  Now that I know you’re there, I will not rest ’til I’ve found and read you all. ALL! ALL!

I chanced upon this little gem as I was roaming the mystery section at my local HPB, looking for something in a  Ruth Rendell or Barbara Vine (one and the same author, in case you weren’t aware). Turns out this one’s the perfect length to fill an hour or so, just enough wicked to last from lunch ’til time to get up and do something constructive, before the boys get home from school.

Polly is the main character and a nasty little thing she is. The book’s short, so I can’t tell you much, but you’ll find out in the first couple of pages that as a child Polly has a problem with stealing and lying. When provoked, she steals a treasured object from the person who’s wronged her and destroys it, lying when asked if she knows anything about it. Grown to adulthood, she falls in love and is presented with another instance in which she must choose what sort of person she’s going to be, good or evil, and decide her fate.

Can’t tell you more, much as it pains me, but you’ll have fun with this one if you take it out for a spin. If you like this sort of psychological darkness, that is. I am a huge fan of the grim and mentally unstable. Wait, perhaps I should rephrase that.

Books in this series can be found here. I had trouble searching for them via Amazon’s method but I managed to track them down by sniffing the trail left by the publisher. And voilà! Looks like they’ve been publishing these since at least 2006 but even with the list of titles I can tell you it’ll be tough getting my hands on them. They’re not as easily obtained this side of the pond as the other. I’ve found some selling for a penny but then there’s the $ 3.99 shipping on top of that. Egads. Is it worth that for what’s essentially a longer short story, not quite a novella? And we Colonists can’t download Kindle books from the UK, though I can’t quite figure out why that is. Isn’t digital digital, no matter what or where?

In summary, this was a satisfying short read in what sounds like a great series but you probably can’t get your hands on them – nor can I, actually – so it’s really kind of cruel for me to trumpet that, isn’t it. But check places like Half Price Books and other used book stores.  If I find a source I’ll tell you (after I buy mine, that is…) and if you find one I hope you’ll return the favor. In the meantime, sad face.

The Exchange by Paul Magrs

From the dark side of the soul to a YA book about a book lover for book lovers.

Following the death of his parents, 16-year-old Simon moves into his grandparents’ claustrophobic bungalow, which quickly becomes a refuge from his bullying peers. United by their voracious appetite for books, Simon and his grandmother stumble across the Great Big Book Exchange—a bookshop with a difference. There they meet impulsive, gothic Kelly and her boss, Terrance—and the friendships forged in the Great Big Book Exchange result in startling and unsettling consequences for all of them.

The Rendell’s short and quick. Magrs (pronounced “mars”) is longer but no less easily read at warp speed. The fact the audience is aimed at 12 and up shouldn’t stop the rabid bibliophile. It certainly didn’t stop me.

Another Half Price Books find. Beginning to see a pattern? I’d stay and chat more about this novel but my aim is to finish it before Mr. G gets home and it’s time to start on dinner. I have goals, people. Goals!

And I have to run…