Seems my guess was the kiss of death for Jim Crace and NiViolet Bulwayo. Sorry about that, you two. Especially to Jim Crace. That man should not stop writing, almost as much as I should, in order to protect the innocent. I’m upset with him for his insistence he’s done. He wants to fish, he says. To relax and fish. Well, maybe he’ll change his mind one day.

Speaking of, have you read a book by him yet, have you? We had this discussion (I did, at least) a few weeks back. Everything he’s written is touched by God Himself. Read all his books, write reviews of him in all the places and maybe he’ll see them and feel all nostalgic and weepy about the terrible feeling of facing the blank screen (or notebook, I can’t recall offhand what he said). I would email him again and instruct him to get back to work but I’m afraid he’ll develop Sebastian Barry complex and begin to look at me askance. Truth is I am the most innocent thing. A bit excitable (only about books, otherwise I pretty much just stare into space) and passionate (ditto) but not at all scary.

Convincing? Should I revise? 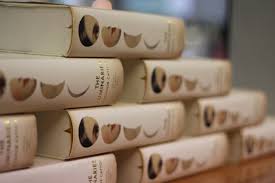 Lots and lots of copies of the book I couldn’t get through.

But the point – lost long ago, in a fit of wildly careening writing – is the Big Prize went to the one novel I tried to get through and couldn’t! Huzzah…?

What’s wrong with me? It’s not a bad book. Not bad bad, I mean. The fault was in not giving it enough undivided attention, I’m almost certain. I’m sort of bad, that way. It’s well-written and about the intriguing and new-to-me subject of the gold rush in New Zealand:

It is 1866, and Walter Moody has come to make his fortune upon the New Zealand goldfields. On the stormy night of his arrival, he stumbles across a tense gathering of twelve local men, who have met in secret to discuss a series of unsolved crimes. A wealthy man has vanished, a prostitute has tried to end her life, and an enormous fortune has been discovered in the home of a luckless drunk. Moody is soon drawn into the mystery: a network of fates and fortunes that is as complex and exquisitely patterned as the night sky.

Sounds lovely when you put it that way, doesn’t it? Well, as far as I know it’s still on my Kindle (I have a free eBook from the publisher, which will disappear when they decide to “archive” it), so I’ll get back on it or die trying. With Moby Dick still ongoing. And that doorstop Tudors.

At least Henry’s dead now, (the VIII, not some random Henry) finally, and Elizabeth’s primed for crown and sceptre, once that pesky Edward gets out of her way. I’d grown tired reading about Henry and his sadism. What an @$$hole, really! Boiling people alive? Dismembering, chopping off heads, hanging and burning? Not to mention the destruction of all those beautiful churches and the illuminated manuscripts. Did you know they used those gorgeous works for toilet paper? Turns my stomach. Ten centuries destroyed in one fell swoop, Ackroyd wrote, and I wanted to weep.

Why the fascination with the Tudors? Shame on us all. While the kind, caring rulers are gathering dust in their marble sarcophagi we’re lusting after the Tudors, because a hot little minx or three and a few messy beheadings make a good story, I suppose. Better we should forget the ulcerous old bastard and look to Elizabeth I. She had her own moments but she is a female role model, of sorts.

Because who needs a king? Not that one, that’s who. 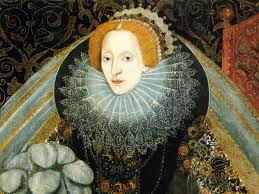 This one, that’s who.

Back to the Bookers, sorry. I get prattling and things go awry, then I don’t feel like working on segues and here we are.

I knew I was off my game this year, as I told you in my last post. My prediction for either Jim Crace or NoViolet Bulawayo didn’t materialize but I had an unsettled feeling I wasn’t quite getting it. My intuition didn’t sense it as strongly this year. Something was off-kilter: my Karma or what-not. For so many years I’ve been nailing it. Not so 2013. Sigh.

I’ll get back to the Catton, with a dose of Melville and Ackroyd on the side. And, well, okay a dash of Joyce Carol Oates’s My Sister, My Love, my creepy pleasure of the moment. It’s based on the JonBenet Ramsey case, if you remember that child murder from years and years ago, about the beautiful six year old whose mother whored her up like a slutty Barbie doll, entering her in beauty pageants (do not start me on that rant). Still unsolved, unbelievably. And just now I read this article, from two days ago saying the slaying indictment, which was never prosecuted (?!), may be unsealed.

You can’t hear it but I’m making a disgusted sound at the thought of how wrong the world is right now, for JonBenet and so much else. Now my forehead’s hitting the desk. You can’t see my desk – THANK GOD – but it’s very 1990s and I want to burn it. The drawers tend to fall out when you open them. It’s an optional feature I chose. In another 100 years it will come back into style, complete with a charming patina of coffee cup rings and stray ink marks.

This would be it for this time but I didn’t direct you to my review of Nicholson Baker’s Traveling Sprinkler, published on the New York Journal of Books website. It’s a  little rambling but they took it, so phew! Relief making the deadline is all I can say. Strike that. I could say much more but I have to go start dinner. Plus, if you’ve read this far I feel badly on your behalf.

Now my work here is done, for this time. I’d meant just to talk about my Man Booker fiasco but then things got away from me. Woe is you!