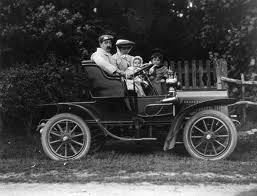 I went on vacation with my family in late July. Or most of my family. My adult, college student daughter stayed home because she wanted to make money more than she wanted to hang out with us. Plus, she’d already been on vacation, since her grandmother made it possible for her to spend a month in Wales, where she stayed with her bestie and has plans to study abroad (University of Swansea) for the winter semester of January 2014.

FINE. Be that way.

So anyway: Gettysburg, Philly, DC and the Appalachians of West Virginia. It was a short vacation, since I have no job and my daughter’s VERY EXPENSIVE RIGHT NOW, so we went for only a week instead of the standard two. But then, we stayed in hotels every night and ate at restaurants, so it wasn’t actually cheap. Short and expensive, rather.

Since the other option is camping I’ll take this route, thanks. I hate camping, what with all the bugs and scary wildlife and communal toilets and either freezing or burning up sleeping in a tent camper and general annoyances, like cicadas the size of bats found in our sleeping areas. And the SMELLS. Oh dear God the SMELLS: impossible to dissipate or identify.

Our camper has air conditioning but the thing is so old the unit threatens to fall through the ceiling, which sags a bit more with every trip. And something goes wrong with the damned thing every, single time, like one of the supports failing, sending the ceiling crashing down. Tires blowing out in the middle of NOWHERE Idaho. The van overheating trying to make it up and down mountain roads in Colorado. Rain soaking the damned “beds.”

Plus, going for only a week minimizes the irritation provoked by being together in a confined space for so long and most of the family whining we want to go HOME, for chrissake. We don’t play well together without the sanctity of places we can hide to avoid each other now and then, plus no two people ever want to do the same thing at any given time. And all but one of us finds nature starts to look awfully repetitive after a while.

Sorry, outdoorsy types. Inside was developed to keep the outdoors OUT and our forefathers passed that along to us in the normal course of evolution. I’m grumpy just talking about camping. Imagine how I am in REAL LIFE.

So, first stop this year was Gettysburg, Pennsylvania, which is around nine hours’ drive from the Chicago area. 2013 is the Sesquicentennial Anniversary of the Battle of Gettysburg, in which a combined total of 46,000 – 51,000 soldiers lost their lives on July 1- 3, 1863. The battlefield is huge, half-circling the town, going on for miles and miles and miles of shame and evil man perpetrates on man.

The Union soldiers were buried in proper graves with markers, the Confederates tossed together in trenches wherever they happened to lie. Some take offense at this disparity in the treatment of the dead. I’m from the South and I disagree. The Confederate “cause” led to this unthinkable carnage. There is no honor in that, no reason the Union should extend the same respect they did to their fallen.

When southerners arrived to claim their dead only a portion could be identified. It’s estimated there are more than 1,000 bodies still buried around the town of Gettysburg and occasionally one will be found while digging for foundations and such. I suppose the remains are sent South, buried with the unknowns.

The National Park had a great museum: 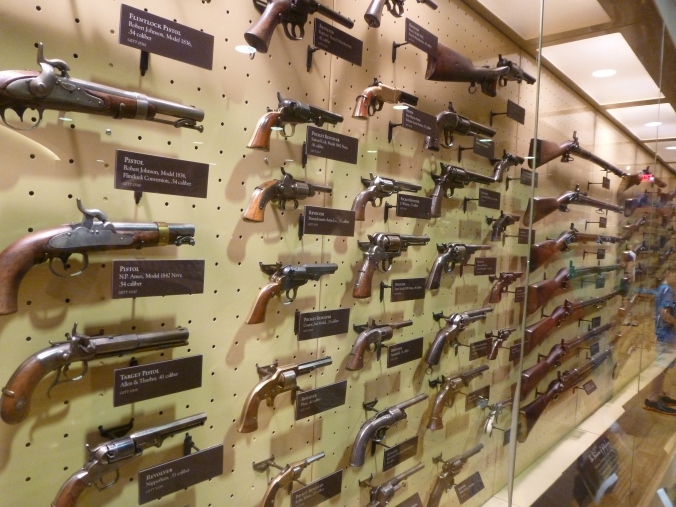 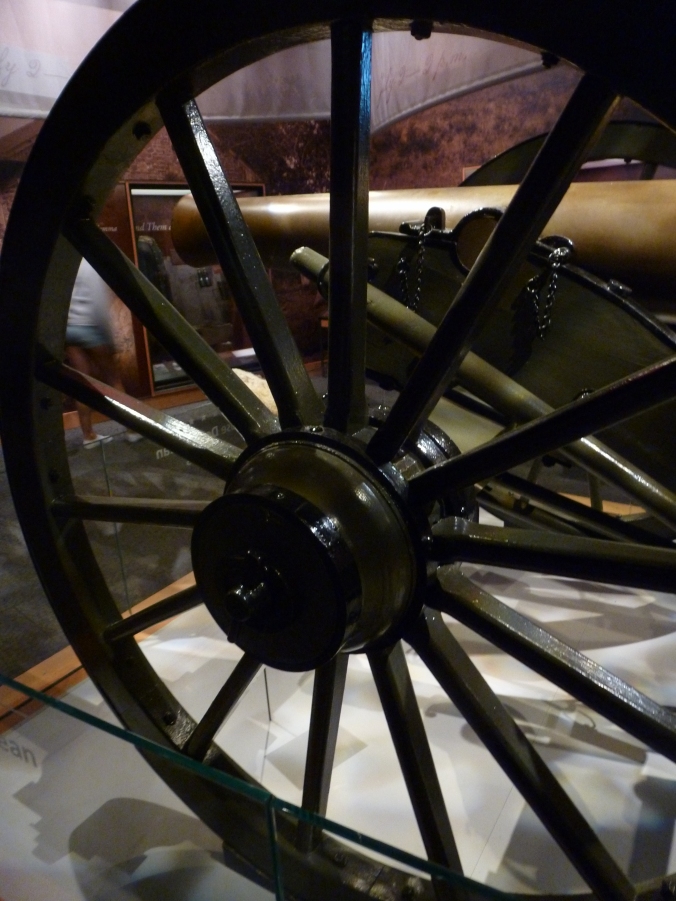 The beat of the drums

No standard for arrangement of the stars at this time 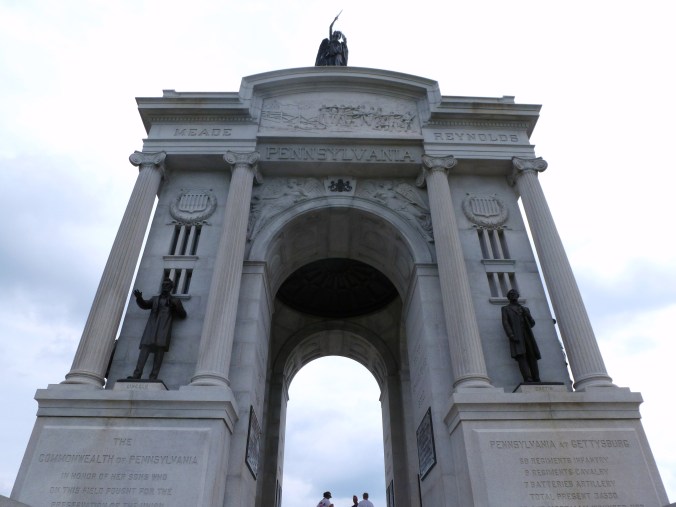 Monument to soldiers from Pennsylvania

Confederates died by the thousands charging up this hill, exposed to Union guns

Train station where Lincoln arrived, to deliver his Gettysburg Address: 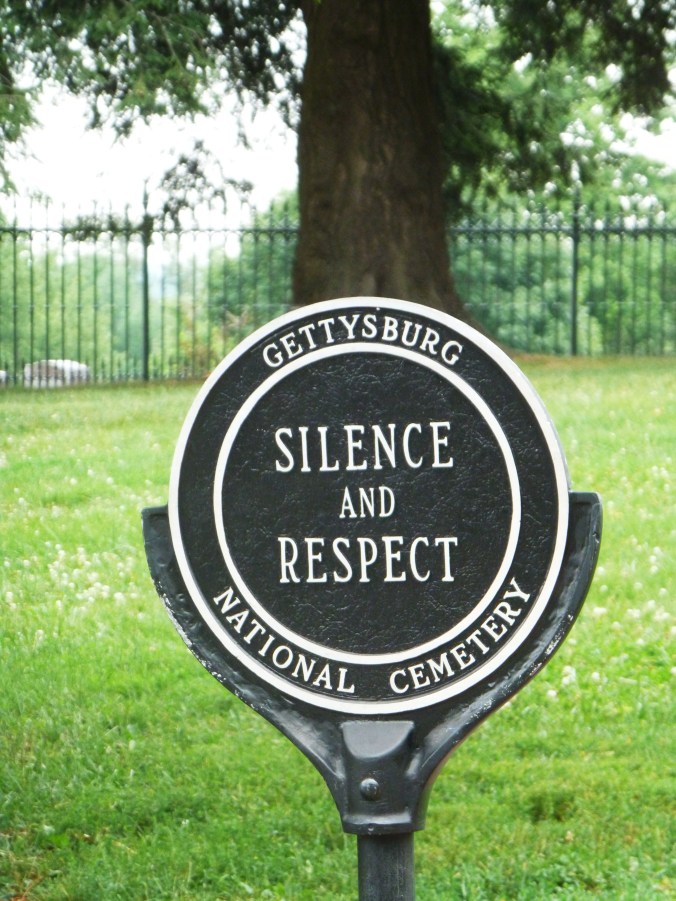 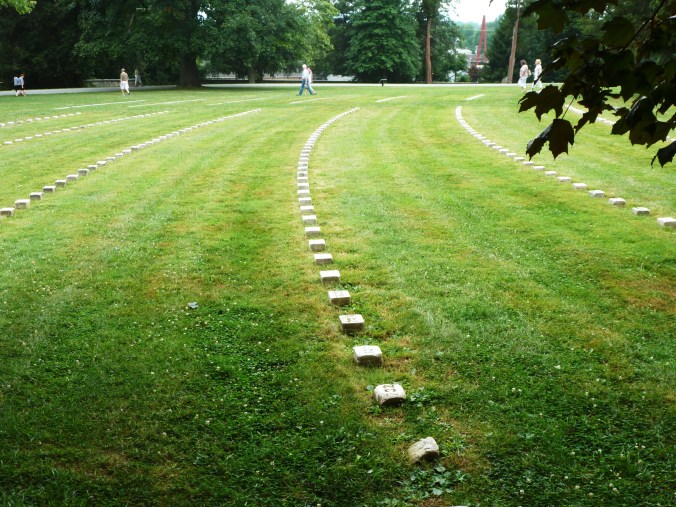 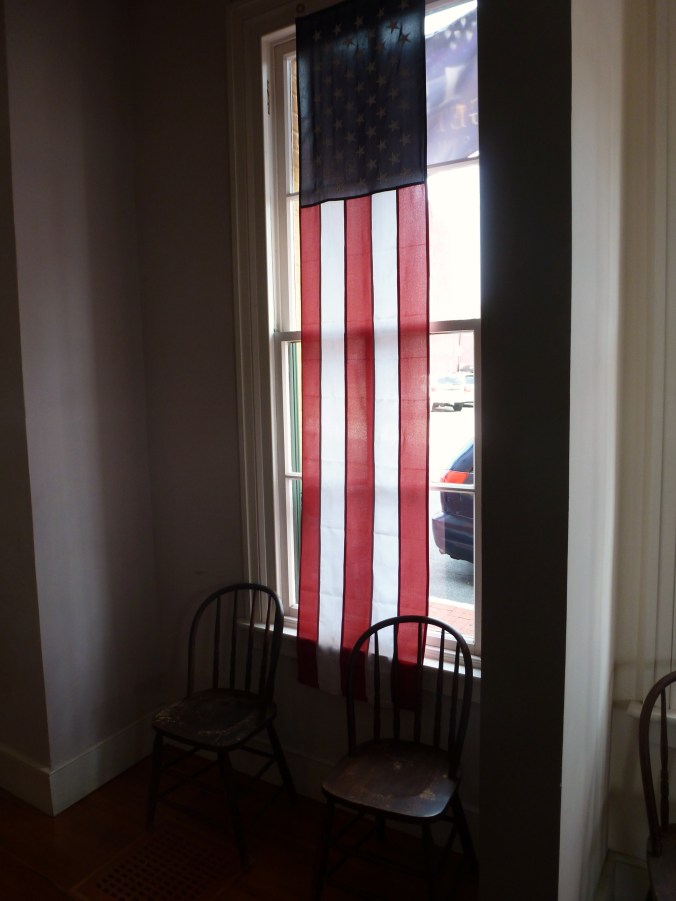 The overall impact we experienced visiting Gettysburg was one of solemn recognition of what the Civil War hath wrought on our nation. Not that we hadn’t realized that before – and this wasn’t my first time visiting a Civil War battlefield – but there’s something about actually being there that brings it all home.

We didn’t have time to linger, that’s the sad part. Having devoted half the day to Gettysburg, half to nearby Valley Forge we had no time to walk the battlefield. Instead, we drove the tour on the map they gave us, which covers such a huge area the best we could do was get out of the van a few times and have a look at various monuments. If we  had walked the actual area I believe it would have had an even greater impression.

But we were there, which is better than not for appreciating what happened there. It’s this sort of history lesson I’ve come to consider part of a worthwhile vacation. This short trip satisfied that and then some.