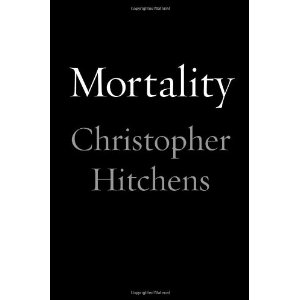 Beware the irrational, however seductive. Shun the ‘transcendent’ and all who invite you to subordinate or annihilate yourself. Distrust compassion; prefer dignity for yourself and others. Don’t be afraid to be thought arrogant or selfish. Picture all experts as if they were mammals. Never be a spectator of unfairness or stupidity. Seek out argument and disputation for their own sake; the grave will supply plenty of time for silence. Suspect your own motives, and all excuses. Do not live for others any more than you would expect others to live for you.

He could be aggravatingly abrasive, an always opinionated and outspoken atheist prone to ranting. He was prolific, could write when he was drunk better than most could do sober and, quite literally, never shut up until esophageal cancer took away his voice, though his writing went on until cancer claimed him, ultimately silencing him.

But, until that moment he was always “on:” before and after his illness he never cancelled an engagement, even if his treatments forced him to throw up immediately before taking the stage. He would not miss the chance for a good argument: the chance to talk, to expound, to debate.

Many despised him but those who loved him did so with uncommon dedication. He was entertaining, caring, funny as hell and certainly not shy or retiring: holding court at countless social events – including innumerable dinner parties at his home – he kept his audience’s rapt attention for hours on end. He’d have given even the notoriously loquacious Samuel Johnson a run for his money.

And he always had the last word.

After his diagnosis of Stage 4 esophageal cancer in 2010, he was in a race for his life. Hitchens underwent the pain and devastation of radiation and chemotherapies, losing his trademark wild, blonde hair, enduring the indignities that come along with the disease – diarrhea, inability to eat, vomiting and weakness –  side effects of the poison that flowed through his veins, simultaneously keeping him alive and killing him.

His health was up one day, down the next, typical for many cancer patients.Though he was no fatalist, neither was he an irrational optimist. Despite his dire prognosis there were times he felt hopeful, when his tumors shrunk and treatment seemed to be progressing. Cranky and stubborn though he was, there were moments he hoped. Near the end his frailty showed.

I have personal experience, as indeed do most of us, seeing the ravages cancer visits on innocents. Having watched, helplessly, while a best friend slowly died from cancer I’ve been through that wringer. There’s hope; then there’s no hope. The numbers are good; then the prognosis is dismal. Patients sometimes outlive the estimates of doctors, it’s true – my friend surpassing his two year diagnosis by another four and a half – but at other times it isn’t possible. The force of the disease is just too great and medical technology insufficient.

Hitchens made it eighteen months after his diagnosis.

Cancer is a bitch.

In Mortality, Hitchens takes us along on his final journey. Ever the writer/journalist, he could not undergo such an enormous life event without recording his thoughts about all he went through,  with his trademark humor:

I wasn’t quite prepared for the way that my razor blade would suddenly go slipping pointlessly down my face, meeting no stubble. Or for the way that my newly smooth upper lip would begin to look a bit too much like somebody’s maiden auntie. (The chest hair that was once the toast of two continents hasn’t yet wilted, but so much of it was shaved off for various hospital incisions that it’s a rather patchy affair.) If Penelope Cruz were one of my nurses, I wouldn’t even notice. In the war against Thanatos, if we must term it a war, the immediate loss of Eros is a huge initial sacrifice.

Some celebrated his impending death; many religious zealots saw nothing wrong with passing harsh judgement. Never mind their religions – at least in the case of Christianity, which took a lot of bruising in Hitchens’s career  – purported to embrace love and forgiveness: in their frustration at their impotence in refuting Hitchens’s statements, and hatred of those who don’t believe the same as they,  there was out and out joy he was dying so painfully, headed for hell, naturally. When he lost his voice, they cheered. How appropriate! The man who dared contradict them could no longer speak. But he could, and did, write, until the bitter end.

Others, more charitable and less eager to see Hitchens depart this earth with the stain of atheism on his soul, offered up prayers on his behalf. Some hoped for conversion, it’s true, and others for the mercy of their particular version of god. That much even he respected:

Suppose I ditch the principles I have held for a lifetime, in the hope of gaining favor at the last minute? I hope and trust that no serious person would be at all impressed by such a hucksterish choice. Meanwhile, the god who would reward cowardice and dishonesty and punish irreconcilable doubt is among the many gods in which (whom?) I do not believe. I don’t mean to be churlish about kind intentions, but when September 20 comes [the date decreed “Pray for Christopher Hitchens Day”], please do not trouble deaf heaven with your bootless cries. Unless, of course, it makes you feel better.

Throughout his career, the man invited controversy and gave as well – usually better than – he got. He thrived on open debate, squashing the opposition with scientific fact and philosophical reasoning. Having prowled through YouTube video after YouTube video, I’ve yet to find any instance in which he could not defend his position, no argument which he did not “win.” No opponent he did not best.

Was he absolutely correct in everything he said and believed, then? Good lord, who is? What he had was a razor-sharp intellect, the ability to express himself and his stance in order to refute the questions and arguments levelled at him. His ability to stay reasonably cool (for the most part…), and stand his ground was near legendary, whether the topic was politics, religion or some other.

He will be remembered as one of the great intellects of the 20th and 21st centuries, like him or not. His words will – and do – fill volumes. The name Christopher Hitchens will forever call up the image of a somewhat crusty, disheveled man unafraid of expressing his opinion loudly and at times obnoxiously, not giving one bloody damn what others thought of him.

I admire the bigger than life personality he was. Living life as a somewhat wishy-washy, reticent soul, I wish I could say I’ve never backed down from an argument, even when I knew in my heart I was right. I wish I had never caved in, letting others steamroll right over me. I’m not saying I agree with everything Hitchens believed but, rather, I wish I had just a bit of his spirit. I don’t feel one should relent solely out of fear of offending. Agreeing to disagree in order to make  peace, okay, because it’s wearying arguing forever. But giving into something one doesn’t believe just in order to end a debate? Never. His statement you may believe whatever you want, just don’t try to force it on him: that’s key.

And we have Mortality, his final published work, written with the conscious realization it would be the last he intended to publish as a collection. He didn’t have time to finish it, or polish it but what he leaves provides a glimpse into his final days, proof of his humanity and what weighed heavily on him as he was dying. It’s filled with raw honesty,  at times half-finished thoughts.

As it wasn’t edited as it would have otherwise been, it is a bit rambly and disorganized but that doesn’t diminish the painful truths of the cancer patient. It still gives the reader a clear picture of all he endured; you’d have to be stone-hearted not to be at least occasionally moved, especially at the expression of the pain he endured when his esophagus was made bloody and raw from radiation therapy, rendering the act of swallowing a torture making him writhe in his bed. It’s a book that’s difficult to read but fulfills the need to hear from him as he comes nearer and nearer the end. Just as he shared the rest of his life with the world, so did he bravely soldier through to the end.

So far, I have decided to take whatever my disease can throw at me, and to stay combative even while taking the measure of my inevitable decline. I repeat, this is no more than what a healthy person has to do in slower motion. It is our common fate.

To say I enjoyed the book sounds ridiculous. I approached it with equal measures of eagerness to know what his last thoughts would be and the dread of returning to the days when I watched my dearest friend fight a similar – and only slightly more hopeful – battle with cancer. It reaffirmed my fondness for Hitchens and reminded me how evil and insidious cancer is. Hopefully, it will also result in some of Hitchens’s detractors coming to realize how human he was, how subject to the same laws of nature as the rest of us and, I imagine, his steadfastness to his ideals. But we’ll never know that for certain. We can only surmise what his last moments on earth proved.

If there is anything “beyond,” Christopher Hitchens will no doubt be at the podium, expounding on life, death and the hereafter. He will be missed.