Will be out rockets red glaring this evening, along with half the American population, save those who are curmudgeonly sticks in the mud. But then, since we haven’t had enough rainfall in two months to call an actual rainfall, they’re more sticks cut to a point, stabbed at the ground with great vigour to no avail, then tossed aside, broken.

That is a sad, sad story.

My daughter made cupcakes for the get-together we traditionally have with my husband’s side of the family. Red velvet cupcakes, made from scratch, no less.* She’s going to top that with white frosting, piped through a fancy decorating tube thing, then sprinkle them with blue sugar. Get it? Red. White. Blue.

The in-laws happen to live right across the street from a hugely impressive annual fireworks display. (If you’re in the Chicago area, it’s in Itasca, east of 53 or 290 or whatever it is there, east of the Elgin-O’Hare expressway that goes to neither Elgin nor O’Hare, on the side that’s Thorndale Rd. Google it.) That makes for a painless evening. We don’t have to go somewhere, find a parking space, then a spot on the ground American personal space away from others to lay your blanket or set up  your chairs or whatever. In place of that we have an easy dinner (pizza, etc.), hang out and talk until dark, then watch the always amazing display, which I calculate must have cost enough to feed a small African nation for a year. We’re so close, occasionally we get the fall-out, the cardboard shreds that blew up with the fireworks. Once upon a time, when the kids were small, these were prized possessions. It’s also traditional someone comments, “We need to shoot out that street light (directly across the street) to make it darker!” Then all laugh a deep belly laugh, as if we haven’t heard fifteen years running. Good times.

There’s a festival in the same general area as the fireworks. Every year they get a band, occasionally a decent one. Last year we heard the music of U2 blaring across the street. My mother in law was holding the newspaper, so we asked her who was playing. It’s something called… U2?

U2? Is that anyone you know?

Lest you think we’re entirely delusional, they’ve had some actual real bands there before, like Lifehouse, that one band that one actor has, etc. It was incredibly unlikely a first calibre group would play Itasca but the resemblance to U2 was impressive. Just enough to risk severing my mother in law’s hand whipping the paper away from her. But no. No U2.

After that buzzkill the gathering went on as usual, another year over, a little more cardboard with trace amounts of gunpowder in our hair, all of us deaf from the BOOMs that set off the car alarms on half the cars parked up and down the street, warranting another joint family belly laugh. Because that’s never happened before.

This year’s gathering will be a bit more poignant than usual. My father in law’s terminal stomach cancer diagnosis this past February will be in the back of all our minds. Though he’s doing well now – very well, in fact – there is no cure when it’s reached Stage 4, having riddled his liver with tumors. As with all passing holidays, we’re well aware it could be his last. The chemo could become less effective anytime, the downward spiral swift. We saw that in the beginning, when he was so incredibly sick, pre-chemo. The doctors were not encouraging. He’d started discussing funeral wishes, writing last letters to loved ones and dictating life stories for posterity. He was so ill he considered refusing chemo treatment at all. But then, once he started the rounds of poison an amazing thing happened. His tumors immediately shrank 40 %. Since then he’s gotten his strength back, become a more hearty eater than I’ve ever seen him and he feels great. Chemo sessions don’t make him sick and the tumors continue to shrink, which makes it all the more difficult believing one day this will end, he’ll become more sick and be gone in, at most, four or five years. People beat doctor’s life estimates all the time. That’s the encouraging thing. But it’s better to go into a family gathering with more appreciation anyway; humans are quite frail, really.

Funny how accustomed we become to what’s always been, forgetting anything could happen from one year to the next. When disaster strikes we’ll look back and think that was the last time we made the same stupid jokes, ate the same pizza, made fun of my mother in law for having no idea who U2 was. Sheesh! How out of touch can you be?! 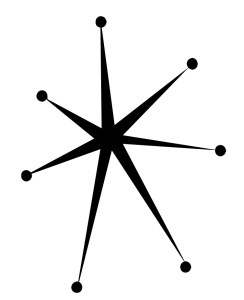 * Why do we say “made from scratch”? Is that indicative of early man scratching the ground with his pointy stick (stop it), digging for grub worms to put in dinner salad?

Woman: Oog! You get worm!

Woman: Me make from scratch!

Scary how little things have changed.

** Every, single time I try to type “Bono” I type “Bone.” Not sure if there’s a correlation.