Funny, when I was in Mississippi I thought it was terribly hot but compared to this week in Chicago, that was nothing. It was hanging out in the high 80s/low 90s there but at least in the shade, with a nice breeze, it was bearable. Here, you walk outside and it's like the world has become a kiln and you're a molded piece of clay waiting to become a vase. My car temperature measured 100 today. Maybe I should go back to Mississippi to cool off.

Hanging around Faulkner's house, on a warm but rapidly cooling June evening, was positively sublime, despite the fact evenings there never got cooler than somewhere in the 80 degree range. In the shade of his woods somehow that just didn't bother me. I kept thinking, "This was his land; he walked here…" I could have been in a literal kiln and it would have been okay with me. I was back, after what felt an eternity, standing under his cedar trees on the reddish clay ground slightly springy from fallen needles. This was my second chance, one thing you can never count on. And the smell was so fresh, so Mississippi. If you've never experienced it it's hard to describe. It's not like Illinois at all. It's more earthy, maybe, mixed with the odor of sun-baked fir trees exhaling at dusk. It's singular.

A lot of my fellow Booktopians mingled in the shade of the side yard, enjoying mint juleps while half the group was on the house tour. I didn't imbibe, because I do alcohol very rarely; it's just something I don't enjoy, especially hard alcohol in strong quantities. Plus, it turns my face, neck and chest bright red. Being nervous or anxious does the same. I can only vouch for the freshness of the bottled water. It was of a fine vintage. 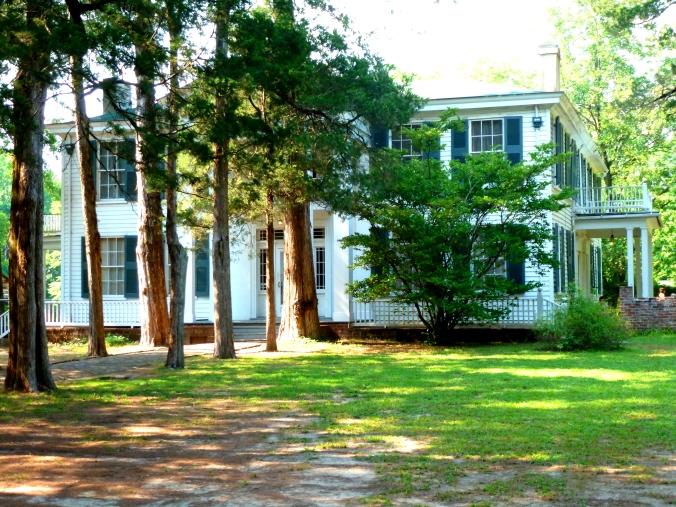 Faulkner's Rowan Oak dates from the antebellum era, built sometime in the 1840s  by Irish immigrant planter Robert Sheegog, formerly from Tennessee, back when Oxford was just a tiny hamlet in the middle of nowheresville, Mississippi. The house and its four acres – on forested land called Bailey's Woods – was, at the time Faulkner purchased it, referred to as "The Bailey Place." Not sure why Sheegog chose to name the woods as he did. My guess is it was his wife's maiden name and a tribute to her family. I'm sure the information's out there somewhere but I'd need another trip to Oxford to find out for sure. That would be a hint, as if that gets me anywhere. 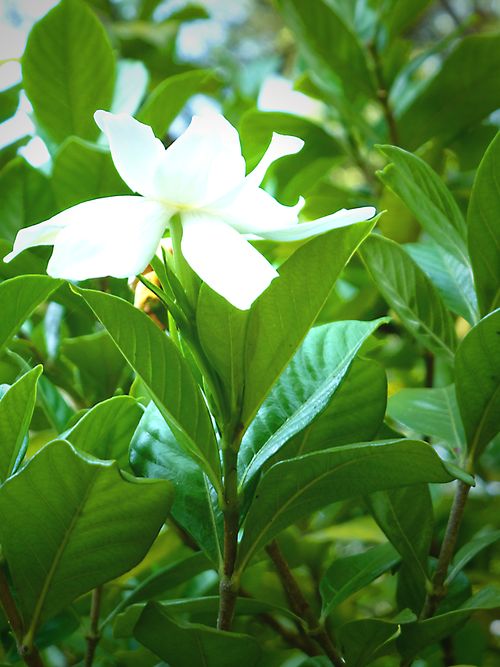 When Faulkner bought the place in the 30s it was in a somewhat dilapidated state but the only intact antebellum place in the area. All the renovations were done by the great man himself. Guess he was quite the handyman. Another skill to pad his resumé. Every little bit helps. I'll bet the guy from Home Depot would have given him a good reference.

I'm sure I mentioned before that the last time I was here the house was closed to the public. This was pre-internet, in the days you had to actually call ahead to find out hours for public museums, only I assumed hey, it's a weekday, I'm sure it's open! Of course that proved not to be the case. I walked around the house, taking in the gigantic magnolia in the front yard, but these were the days before I discovered taking  detail shots rather than just the fronts of buildings. This time I spent who knows how long walking around every inch of the place; these photos just a small fraction of the pictures I took.

I didn't walk by all the out-buildings and into the woods either time. I recall time was a factor during my first visit, nearly twenty-five years now. It was the year before my brother died and he was with us this trip, for what turned out to be his last visit to see our grandmother. That would have made the year 1990, one year after I married.

We wound up having to leave my brother in the hospital, as it turned out, his severe diabetes having flared so dramatically he couldn't make the trip back. Leaving him there felt awful. Honestly, I don't remember what made that decision defensible. Looking back makes it all the worse.

This time I had full run of the house, barring rooms protected from touchy people like me by plexiglass, but again managed to miss those out-buildings, choosing instead to participate in the Booktopia Yankee Book Swap. I was just so entranced I was there, that I'd seen the interior of my literary icon's house, walking the same floors he did, seeing his own belongings in place. And I would swear his presence is still alive in that house. I don't mean the place is haunted. Delusional I may be but not that much. All I know is I've been in many author's homes (all of them dead, by the way, so if you've published something you may not want to have me for dinner) and felt absolutely nothing. But at Rowan Oak there was most definitely something. Some echo or shadow or residual emotion. 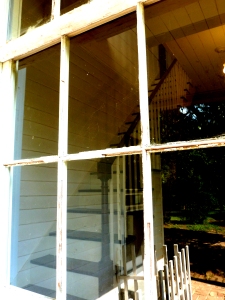 "If I were reincarnated, I'd want to come back a buzzard. Nothing hates him or envies him or wants him or needs him. He is never bothered or in danger, and he can eat anything."

The relationship between WF and his wife, Estelle, was volatile, more so than that between father and daughter, despite some rather awkward moments. Things got pretty nasty at times, or at the least a highly unfriendly. Away in California writing screenplays, WF didn't always make his way home to the right bed, shall we say. And Estelle got wind of this, through her channels. I don't think it was only that but in itself that could start up quite a marital spat. I imagine it made for some interesting homecomings. Oh, to have been a mosquito on the wall.

Still, endure they did, somehow. Of course they had complexities – behind closed doors – biographers will never know about. But a good deal of the cement binding them was Estelle's privilege to be married to a famous man. And for WF, it could have been something as basic as the house, the fact that's where his belongings were and divorce was just too much distraction from his work.

In the end, though, Estelle got in a nice dig: the day after her husband was buried she had a window unit airconditioner installed in her bedroom, one thing her husband had repeatedly denied her, because he didn't believe in interfering with the weather. When queried as to the appropriateness of doing such a thing the day after his funeral, Estelle replied if she's going to mourn she may as well do so in comfort. 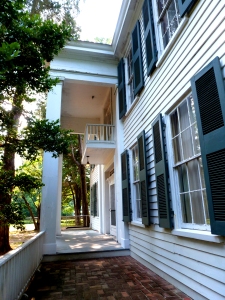 With all the other photos for this post being from the outside, I wanted to include what I believe may be the most breath-taking from the interior: the notes WF wrote for his novel A Fable, left on his wall all these decades past - a miracle of literary memory.

It brought tears to my eyes, as I knew it would. For how many years had I known about it and how long did it take to actually get there. It gave me a chill, like seeing the attic where Anne Frank hid, the burial place of Dickens, Emily Dickinson's gardens… All had deep meaning for me but none so much as this. His writing on his walls. The plexiglass was the one and only thing stopping me from trailing a finger across it. Rules are made to be broken. 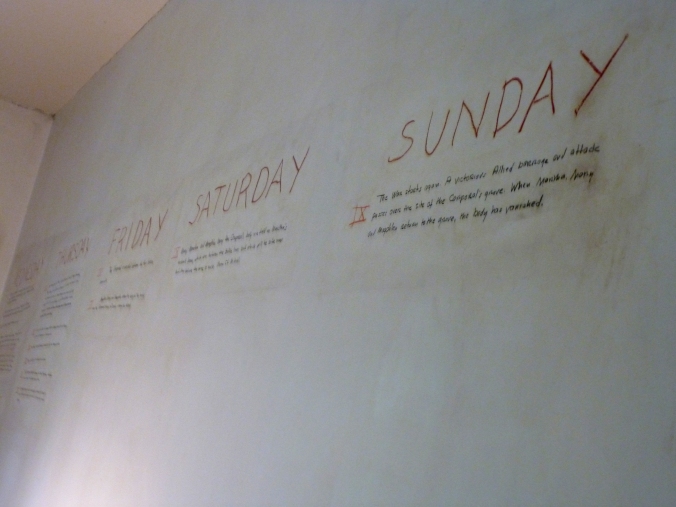 And so it was a dream fulfilled, though only partially. I can only hope life allows me another visit, this one thorough, plenty of time to wander the grounds, sit and inhale. Nothing so tempts fate as a wish, but tearing myself away broke my heart.

"Given the choice between the experience of pain and nothing, I would choose pain." 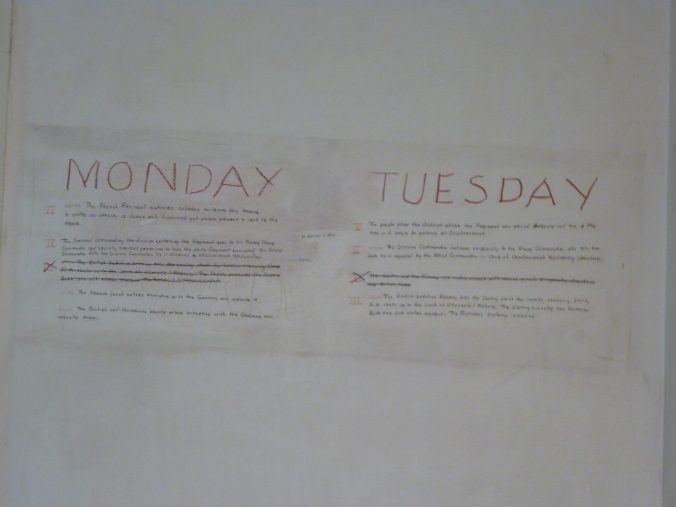 He wasn't always benevolent, often a downright bastard:  genius his only constant. I find it impossible to judge him, nor is it my place, reaping the benefit of his beautiful mind without interjecting subjective opinion. Maybe I even like a little bastard in my icons: sinners make far more interesting material than saints.