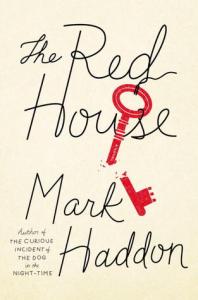 The Red House by Mark Haddon

The set-up of Mark Haddon's brilliant new novel is simple: Richard, a wealthy doctor, invites his estranged sister Angela and her family to join his for a week at a vacation home in the English countryside. Richard has just re-married and inherited a willful stepdaughter in the process; Angela has a feckless husband and three children who sometimes seem alien to her. The stage is set for seven days of resentment and guilt, a staple of family gatherings the world over.

But because of Haddon's extraordinary narrative technique, the stories of these eight people are anything but simple. Told through the alternating viewpoints of each character, The Red House becomes a symphony of long-held grudges, fading dreams and rising hopes, tightly-guarded secrets and illicit desires, all adding up to a portrait of contemporary family life that is bittersweet, comic, and deeply felt. As we come to know each character they become profoundly real to us. We understand them, even as we come to realize they will never fully understand each other, which is the tragicomedy of every family.

The Red House is a literary tour-de-force that illuminates the puzzle of family in a profoundly empathetic manner — a novel sure to entrance the millions of readers of The Curious Incident of the Dog in the Night-Time.

Two siblings and their families, totally dissimilar in financial situation and personality, holding pent-up frustration/irritation with each other to begin with…

How many families don't have some sort of feud ongoing, grievances, chips on shoulders. So they don't speak, or do so rarely, until a big life event – usually a funeral but it could be a wedding or birth as well – forces them together. We expect they'll realize they have missed each other, that they'll re-discover their deep, shared bond. And maybe they will, if both aren't too blind to see it.

Or, then again, maybe not. Maybe they'll remember why they put up the walls in the first place and be relieved, once the vacation is over, they'll not have to see each other again for a very long time.

Haddon's story isn't anything original. Its framework is made up of the problems families have getting along with each other, trying to make the best of things with the people they're blood-related to, even if the road is rocky and full of holes. Because families should get along, in an ideal world. It can't always be – in extreme cases – but between Angela and Richard there is no unforgiveable event, just a series of built up small ones, keeping them apart. Of course Angela's upset her brother was always the clear favorite: the successful, wealthy doctor married to the much-younger trophy wife. Here she's been, tending to her dying mother's everyday needs while her brother's hundreds of miles away, his only contribution a weekly phone call. And who does her mother want by her side? Why, Richard, of course. The prodigal son.

Nothing new at all, as far as plot or character, but there's certainly no harm in that when the writing's as smooth and accomplished as Haddon's, the characters distinct in their sufferings and joys. It's not plot-centric; the story revolves around the people. It's a character study, and by the end there's distinct growth and movement, just as there should be. Spending time together puts both families through the mill and when they pop out the other side their true characters emerge. I can't say all the outcomes are happy but these are the small moments of real life: the joys, the sorrows, the regrets, betrayals and loves.

I wouldn't hesitate recommending this book as a work of general literary fiction: rewarding, smart summer reading that won't rot your brain. A worthwhile read. 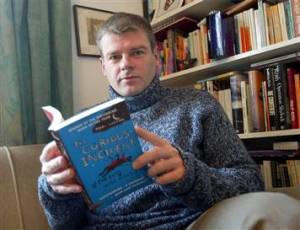 Sarah Reads Too Much

"My first experience with Mark Haddon was with his well-known novel The Curious Incident of the Dog in the Night Time.  I instantly loved that book and its main character, and expected the same here.  That didn’t quite happen.  It took me much longer to get into this one, and now that I’m finished – I’m still not quite sure how I feel about it."

"The Red House was actually a nice easy read and I was surprised how fast I got through this book; this could have been all the blank pages throughout the book. While I never really connected with this book the writing styles used throughout this book were interesting and almost experimental at times. Some of it worked and some of didn’t, I think Mark Haddon was overly confident when he wrote this book and it seemed to come through in the novel. I’m sure many people will love and enjoy this book and don’t let my opinion stop you from reading it. For me I struggled making that connection and I tried and tried to enjoy this book but it just didn’t quite get there."

Of Life and Reading

"The Red House by Mark Haddon is a rollercoaster of emotions and all it works surprisingly well and all adds up at the end of the book. I would definitely and most certainly recommend this read for the long summer weekend that comes up."

"Haddon writes superb books for children, teenagers and grown-ups, and gets every voice in this one dead right. He is also a master craftsman, so this complicated narrative moves with the speed and certainty of released, unhappy holidaymakers hitting the homeward road. So shove this in your holidaying bag. You may have made a mistake with the booking, but you won't with the book."

"For a week, they are all compressed in the countryside and Haddon does an alarmingly good job at showing just how isolated each is, full of secrets, gripped by the past and shaped by their childhoods."

4 thoughts on “Review: The Red House by Mark Haddon”