I haven't done a blogger interview in a while so it's high time I returned to it. When I very fortunately stumbled upon Karyn's A Penguin a Week I knew I had to start back with her. If you visit you'll understand what I mean. 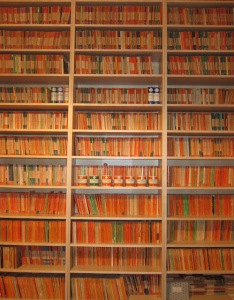 1).    What lead you to start blogging? And why did you decide to concentrate on vintage Penguin books?

I started out initially with the idea for a project, rather than for a blog, and so my blog is probably unusual in its very strong focus on a single topic, being reviews of the old vintage Penguins. I have been collecting these books since I was a teenager, though perhaps I was a little less obsessive in those days. There was no internet then to help guide reading choices, and I found that old books with orange spines were not only very cheap, but also invariably interesting, and so you could buy titles at random and be guaranteed of discovering something worth reading.  But you cannot do this without becoming aware of all the books and authors which are slowly slipping into obscurity, and also that most vintage Penguins are purchased these days for their covers rather than for the stories they contain. I wanted to do something about that, so I set out to write about each one as I read them, to at least create a record of a work that someone once created, but also to let others know that some of these forgotten books are worth seeking out.

2).    Have there been any downsides to blogging, any bad experiences or times you've found it tiresome?

I think publishing anything on the internet has its downside, because there are people out there who will criticise you personally if you express an opinion which differs from their own. It only happens rarely, and it is more than outweighed by the positive feedback, but it took a little getting used to.  Other than I have found blogging to be a very rewarding experience.

3).    How difficult has it been to obtain vintage Penguins? Any fear you'll run out of material?

No, I worry more about there being enough time left to read all the books I already own. Vintage Penguins are very easy to source if you are willing to pay enough for them, and I suspect that with a sufficiently full wallet you could buy a substantial collection in a single day in a place like Hay-on-Wye, or by trawling through book selling sites on the internet. But I think that would also rob the enterprise of any pleasure, for the real enjoyment comes from unearthing them in out-of-the way book shops, and in finding them cheaply. My collection is a reminder that time has passed to some purpose, and of all the days spent in the search.

4).    Do you read other books, in addition to the books you blog about? Have you thought of starting up another blog to record your thoughts on those?

Not really. The blog, the PhD, and a large family take up all the time I have. If I could find more time I would read through the Penguins faster, because I love this process of choosing the books at random and discovering something new, or learning more about the past. The only exception I can recall is reading Christopher Hitchens’ autobiography the week after his death, as my own memorial to him; other than it has been strictly Penguins since the day I started the blog.

5).    Is there one standout favorite vintage Penguin book you loved most? One you particularly disliked?

For me, the best Penguin so far has been no. 2599, The Last Tresilians by J.I.M. Stewart. He was an Oxford don who wrote perhaps 50 mystery novels using the pseudonym Michael Innes, and I find them highly variable in quality: some witty, some bizarre, and some dull. This novel is also a mystery but a more intellectual one, providing a lesson in the analysis and interpretation of painting alongside the story it tells, and also exploring the appeal of modern art, and exposing the small-mindedness and ruthlessness of University politics. The writing is so exceptional, with the ideas so creatively expressed, that I couldn’t bear the thought that this book had been forgotten, and yet it must have been, as only 12 people are listed as owning a copy on librarything. The Penguin which disappointed me most was no. 2999 Mute Witness, which must have been published right at the time they were making the transition to more popular works. It was the inspiration for the 1960s film Bullitt, which I love, but I found it barely readable.

6).    Are there any elusive titles you've been searching for, books you're afraid you may never find? How about sources, do you have a dependable supply?

There are certainly some Penguins which are rare, almost all published during the war years when they had paper rationing, and therefore fairly fragile. I worry more about finding the ones published in the late 1960s though, because they are small format with fairly unappealing covers and, unlike the earlier Penguins which are very recognisable, there is nothing about the later ones to alert someone who has them that they may be wanted, so I worry about them all being thrown away. I buy the Penguins in order to read them, and I’m not at all concerned about first editions, pristine condition, rarity or value, and so every book I haven’t yet found has the same value to me. They are very difficult to source in an isolated city like Perth, so I mostly seek them out when I’m on holiday. We once bought an old stretch limo, put the children in the back, and travelled across Australia stopping at ever charity store and second hand book store we could find, and I found hundreds that way. And I spent a few weeks earlier this year travelling around the UK looking out for cheap Penguins.

7).    Do you read many other blogs? Are they generally literary? Could you tell us about two or three favorites?

The blogs listed in the sidebar on my site are the ones I read regularly, and they are almost all literary. If I had to choose some favourites I would nominate the Age of Uncertainty because of his skill in writing of ordinary topics in the most interesting way; Kevin from Interpolations because his reviews are forthright and creative in a way mine will never be; and Simon from Stuck in a Book, for much the same reasons, and because I met him a few months back and found him delightfully friendly and encouraging.

8).    Is there a favorite spot where you like to read, a particular setting or chair, etc.? What about writing? Do you have a set space for that?

For part of each week I live on a semi-rural block on the outskirts of Perth (with the other part spent in suburbia on account of the children’s schooling). A rural block over here means far too many encounters with snakes, spiders and scorpions, but it also means that for most of the year I can lie outside on a couch under the back patio with an uninterrupted view of blue sky, tall eucalypts, and Australian bushland. Lying there, reading the current week’s Penguin, is my favourite way to spend a Sunday afternoon.

9).    Finally, do you have writing aspirations of your own, aside from blogging? Any plans to write your own book?

No. Aside from finding, reading and blogging about the first 3000 Penguins, my aspirations are focused on continuing with the research which forms the basis of my PhD. It is sobering to realise just how little is known about so many diseases, something I learned years ago when I had a baby with a rare and fatal congenital heart condition. That experience has directed my life ever since, so I hope only to make some small contribution with my research, and that will be enough for me.

Thanks so much, Karyn, for sharing about your blog!

9 thoughts on “Blogger Interview: Karyn Reeves – A Penguin a Week”

I had six apples on the verge of going bad, so I decided to make homemade apple sauce. It's the second time I've made it in the past month.