Cheryl Strayed talks about 'Wild: A Memoir About Hiking and Grief': nyti.ms/Hj2KTb

Libraries of the Rich and Famous: Part One, Part Two, Part Three

What Books Make You Cringe to Remember? http://www.theawl.com/2012/04/what-books-make-you-cringe-to-remember

Seth Grahame-Smith's latest bit of… whatever you'd like to call it:

The sequel to Mantel's 2009 Booker winner Wolf Hall. Book two in the trilogy.

"Though he battled for seven years to marry her, Henry is disenchanted with Anne Boleyn. She has failed to give him a son and her sharp intelligence and audacious will alienate his old friends and the noble families of England. When the discarded Katherine dies in exile from the court, Anne stands starkly exposed, the focus of gossip and malice.

At a word from Henry, Thomas Cromwell is ready to bring her down. Over three terrifying weeks, Anne is ensnared in a web of conspiracy, while the demure Jane Seymour stands waiting her turn for the poisoned wedding ring. But Anne and her powerful family will not yield without a ferocious struggle. Hilary Mantel's Bring Up the Bodies follows the dramatic trial of the queen and her suitors for adultery and treason. To defeat the Boleyns, Cromwell must ally with his natural enemies, the papist aristocracy. What price will he pay for Anne's head?"

"Set in contemporary South Africa, Absolution is a big-idea novel about the pitfalls of memory, the ramifications of censorship, and the ways we are silently complicit in the problems around us. It’s also a devastating, intimate, and stunningly woven story. Told in shifting perspectives, it centers on the mysterious character of Clare Wald, a controversial writer of great fame, haunted by the memories of a sister she fears she betrayed to her death and a daughter she fears she abandoned. Clare comes to learn that in this conflict the dead do not stay buried, and the missing return in other forms—such as the child witness of her daughter’s last days who has reappeared twenty years later as Clare’s official biographer, prompting an unraveling of history and a search for forgiveness. Patrick Flanery is an exhilarating new writer, and this is a masterpiece of rich, complicated characters and narration that captures the reader and does not let go."

"From the highly acclaimed author of Atlas of Unknowns (“Dazzling . . . One of the most exciting debut novels since Zadie Smith’s White Teeth”—San Francisco Chronicle; “An astonishment of a debut”—Junot Díaz), a bravura collection of short stories set in locales as varied as London, Sierra Leone, and the American Midwest that captures the yearning and dislocation of young men and women around the world.
In “Lion and Panther in London,” a turn-of-the-century Indian wrestler arrives in London desperate to prove himself champion of the world, only to find the city mysteriously absent of challengers. In “Light & Luminous,” a gifted dance instructor falls victim to her own vanity when a student competition allows her a final encore.  In “The Scriptological Review: A Last Letter from the Editor,” a young man obsessively studies his father’s handwriting in hopes of making sense of his death. And in the marvelous “What to Do with Henry,” a white woman from Ohio takes in the illegitimate child her husband left behind in Sierra Leone, as well as an orphaned chimpanzee who comes to anchor this strange new family.
With exuberance and compassion, Tania James once again draws us into the lives of damaged, driven, and beautifully complicated characters who quietly strive for human connection." 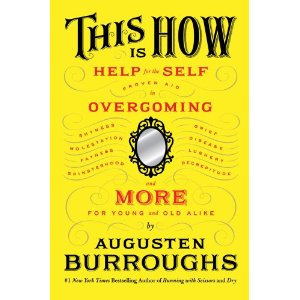 "From the #1 New York Times bestselling author of Running With Scissors comes a groundbreaking book that explores how to survive the "un-survivable" and will challenge your notion of self-help books
To say that Augusten Burroughs has lived an unusual life is an understatement.  From having no formal education past third grade and being raised by his mother’s psychiatrist in the seventies to enjoying one of the most successful advertising careers of the eighties to experiencing a spectacular downfall and rehab stint in the nineties to having a number one bestselling writing career in the new millennium, Burroughs has faced humiliation, transformation and everything in between.  This Is How is his no-holds-barred book of advice on topics as varied as:

And that'll do it for today.