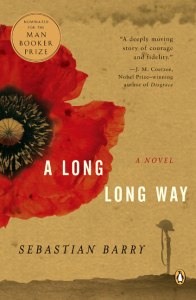 It had to happen eventually. Though I was determined to read it slowly, once I hit the last quarter there was no putting it down.

A Long Long Way is slowly paced. Not as in oh my God when will this thing get going, as I found opined on another blog written by a reader struck, initially, by an unfortunate episode of dubious taste.

Think of lying back in a boat, reaching over the side trailing a finger in the water, wearing Edwardian dress and holding a parasol to protect  milky white skin. Of course, if you're male you may wish to make substitutions. You'll be rowing the boat so the lady may laze, reposing comfortably upon cushions downy soft. Because a lady neither breaks a sweat nor exerts. She is better suited to daydreaming, occasionally sighing gently.

Now that we have that settled.

I've mentioned already how easy it is to sympathize with Willie Dunne, the sweet young man sent off to fight in the fields of Belgium while his heart is back in Ireland with his love, Gretta of the green eyes. It's wrenching witnessing horrors through Willie's eyes and difficult knowing such a large part of his motivation for serving is the need to impress his father, because his son is not manly enough for his taste. Doesn't make one feel inclined to sympathize much with the man, even after his speech about having been a loyal policeman putting his life on the line as Ireland's beginning to split apart at the seams. But dear God things shift so cruelly by the end.

Though the plot is certainly attractive and keeps a due amount of tension it was for me far more about absorbing the language. I swear, this man's tax returns must be more romantic and poetic than the average love letter. Each time I open the book I tell myself I'm going to figure out the formula for how he does this but each time I'm so pulled in by his magic I forget I'd even had an agenda.

I know he does it by use of long, lulling sentences and keeping that slow pace mentioned above. But there is action and that's when any idea of analysis slips away. It's a time of war. Men are alternately being blown to bits and desperately seeking solace, living for weeks in filthy, sometimes flooded trenches with no food or water for days. And through it all Sebastian Barry manages that incredible flowing prose I'd know anywhere. I believe I may admire him for it, too.

I don't believe I need tell you the plot because really it's all here. Willie Dunne does his duty with a mixture of bravery and raw fear. There are friendships and losses, misery followed by brief furloughs. Back home are his sisters, his policeman father and his love, Gretta. And he misses them terribly when allowed the luxury of thinking beyond basic survival. Ireland is on the brink of civil war before WW I interrupts but the rifts have started and there is violence in the streets, part of which Willie's father finds himself in the midst of, his life and those of his comrades on the line. All the time Willie is away he awaits word from Gretta, and yes I assumed she must be a horrible person when the letters are from his sisters, instead. There's nothing more I can say, really, without giving away too much.

For this book Sebastian Barry was nominated for the Man Booker Prize. You may recall how I felt when his On Canaan's Side didn't make it to the Shortlist in 2011 and I would rather not go into my feelings on the Booker in general, thanks very much, though many congratulations to Julian Barnes. However, the stars did align for The Secret Scripture (the first of his books I read), winning him both the Costa and James Tait Black Memorial Prize, which are proof some judges on this earth know their business quite well. And did I mention A Long Long Way was chosen for Dublin's One Book One City read in 2007? Because it was.

Overall I guess what I'd like to say I've already said. I love many styles of writing from the florid prose of Dickens to the stripped down minimalism of much contemporary fiction but Sebastian Barry is on an entirely different plane. And you may not agree, that's fine. Though I'd rather not speak to you if that's the case.

Next, I'm not sure if I'm supposed to go backward to Annie Dunne or re-read The Secret Scripture and then Annie. But I'll figure that out. I found an affordable copy of his first novel, Macker's Garden, which I believe has no relation to these about the Dunnes but I won't read that 'til I've read through to On Canaan's Side again. However, neither love nor a reasonable amount of money will get me a copy of The Engine of Owl-Light, as of the last time I nosed around. This was his second novel and I've had no luck at all adding it to my collection. If I have to I'll fork over more money than I was comfortable with before but I'll deal with that when it's time. Mayhaps  a miracle will happen in the interim and I'll luck upon it in a used bookshop.

Speaking of time, his novels take quite a bit of that and being a playwright as well there's his tendency to write those when I'd rather he worked on a novel. Far be it from me to dictate to a genius but, well…

Let's face it. I'm going to be forced to start on the plays,  now, won't I. I may have a wait between novels and I'm not sure I can sway or hurry him with stories of my tears falling upon the keyboard, my wails splitting the ears of my family as I wallow in abject misery. Being a gentleman he'd pat me gently on the head and express his regret, which would not be a bad happening, mind, but in the meantime it's read and re-read and hope.

3 thoughts on “Review: A Long Long Way by Sebastian Barry”

SnapChat filters. I wish I could walk around with these things, let me tell you. Maybe not the healthiest ambition, because objects of perfection are insidious, but they're kinda fun. Ain't gonna lie.