Well, now. It's taken me eleven days but I have actually finished my first book of the year. I won't review it here, as it's slated for publication in Library Journal next month and I consider it theirs, but once it's up I'll link to it, I promise, though I've been woefully shameful about that. It's hard keeping up with it all but I am bound and determined to make 2012 THE YEAR LISA GETS IT TOGETHER. Or at least isn't quite so pathetic.

The book I finished is one I've been talking about here, A Magnificent Obsession: Victoria, Albert, and the Death That Changed the British Monarchy by Helen Rappaport. Really great stuff, can't emphasize it enough. If you're a Victorian buff keep an eye out for it. It will be published sometime in March.

Think you know all there is to know about Victoria? Well, think again. 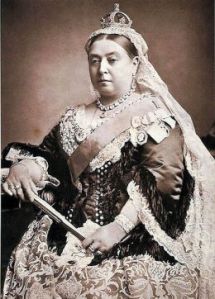 I feel a bit sheepish because I realized earlier today I've read another book co-authored by Ms. Rappaport, Dark Hearts of Chicago.

"When young, inexperienced but very ambitious female reporter Emily Strauss bluffs her way into newspaper magnate Joseph Pulitzer’s office, she comes away with a treacherous assignment: to find out what happened to Anna Zemeckis, one of many women who have disappeared during the 1893 World’s Fair in Chicago. With the support of a young man who is just venturing into the burgeoning trade of news photography, Emily soon finds herself in a race against time to save Anna’s life and to bring her story back to New York before Pulitzer’s tough deadline expires."

Really good novel, especially if you live in Chicago. It's still good even if you don't. I also like books with strong female characters in professions generally considered the realm of men. And in the 19th Century that was usually the case. Not always, but usually.

Harriet Martineau wrote some pretty brazen articles about the rights of women. Ditto Nellie Bly (pen name of Elizabeth Jane Cochran). So they were out there but not in huge numbers. Just wish I had the time to read a lot more by these determined women. Same for the suffragettes, one of whom, Mina Van Winkle, was very likely related to me since this side of my family originated in the NY/NJ area as did she. And it's not that common a name. I smell a research opportunity, another one I have no time to pursue. Sigh.

Next, three books I requested from Yale University Press:

Losing It: In Which An Aging Professor Laments His Shrinking Brain, Which He Flatters Himself Formerly Did Him Noble Service by William Ian Miller

A Little History of Philosophy by Nigel Warburton

And, hiding beneath those, Salvage the Bones by Jesmyn Ward, the surprise, come from behind winner of the National Book Award. If you know my love of southern writing the attraction will make sense and this one's set in my native Mississippi.

The Yale U.P.s are, unsurprisingly, VELLY academic in tone. Or at least the first I've started, Reading the 21st Century. They may be a bit slower going but I will fit them in somehow. Great titles, too, aren't they?

Salvage the Bones I've already started and it slammed me into Mississippi within the first couple of pages. I mean that in a good way, as far as sense of place. Her style is delicious: simple, not flowerly and it conveys both place and character masterfully. I have a feeling this is going to be a "read more quickly than I'd like" book, one I have to finish to know what happens and wish I had time to re-read.

But thank goodness I finally finished that first book of 2012. Not sure why that bothered me, but patience has never been a virtue of mine. Speaking of, a load of laundry stands between me and some reading. Catch you later.

I swear, all of ten minutes running around and he's worn out!