route 66: the mother road herself

A bit of photography for you this sunny (here, at least), temperate day. I stood in the middle of the road to get this shot, in the heart of an almost completely abandoned Route 66 virtual ghost town. All the former businesses were derelict, windows broken, insides filled with debris. I'll be posting several other photos from this location throughout the week.

Have to cut this short this week. It's family birthday party day. (I know, yay.) My boys had their birthdays on July 30 and 31 (two years apart, not twins, which may actually be more remarkable) but we were on vacation then. Today's the first chance we've had to observe their joint birthdays. I still have loads to do; the house looks like Irene picked it up, tossed it around and threw it down again. We're nowhere near the coast, tucked away safely in metro Chicago, but you wouldn't know it by looking in our windows.

Hey, you aren't looking in our windows, are you? Because that's so not cool.

Still reading the Booker Longlist books, working on a couple reviews I'll have up on the blog and reading NetGalley eBooks on my iPhone.

I was reading Chris Bohjalian's The Night Strangers in bed last night. It has supernatural themes, which make me jumpy as a circus performer. When my husband let out a sudden SNORT in his sleep I swear I jumped a foot off the bed. My heart rate shot through the roof. It was not a fun time. 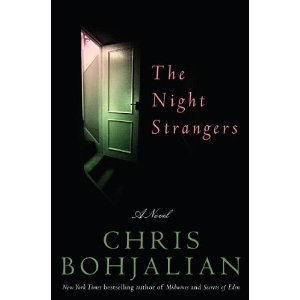 "In a dusty corner of a basement in a rambling Victorian house in northern New Hampshire, a door has long been sealed shut with 39 six-inch-long carriage bolts.

The home's new owners are Chip and Emily Linton and their twin ten-year-old daughters. Together they hope to rebuild their lives there after Chip, an airline pilot, has to ditch his 70-seat regional jet in Lake Champlain due to double engine failure. The body count? Thirty-nine.
What follow is a riveting ghost story with all the hallmarks readers have come to expect from bestselling, award-winning novelist Chris Bohjalian: a palpable sense of place, meticulous research, an unerring sense of the demons that drive us, and characters we care about deeply. The difference this time? Some of those characters are dead."
– Amazon.com

Over the course of last week I reviewed:

The Double Life of Alfred Buber by David Schmahmann

The Curfew by Jesse Ball

We stopped by Catoosa, OK for a look at The Blue Whale.

And had a look at one image from an abandoned gas station along Route 66.

Next week I'll talk about a great book for writers/bloggers, another Booker Longlist read and, if I have the time, a couple long overdue eBook reviews. And, of course, more photos from sites along Route 66 from our summer vacation.

Have a good week. Stay safe if you're out East

The Doctor: Rory, take Hitler and put him in that cupboard over there. Now. Do it.

One thought on “The Sunday Salon – August 27 Edition: The reading week. Bits of This and That. And Hitler.”