You'll have heard by now a sharp rap, followed by a series of dull thuds. The first was my chin hitting the table. The second, my head banging the wall. 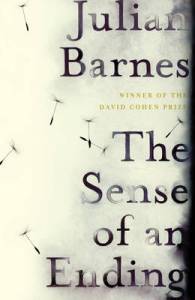 Mere minutes ago I turned the last page of Julian Barnes' The Sense of an Ending,' a book so gorgeous I am sitting here literally biting my tongue to keep from weeping at the sheer perfection of it. Yes, weeping.

I am not a crier. I do not cry. If I do cry something disastrous has happened, something inconceivable. Or, I've just heard about or seen animal abuse – in a movie, in real life or any way, shape or form. But the minute I read the last page of both Sebastian Barry's On Canaan's Side and Julian Barnes' lovely novel I found myself in the same fix. I could weep like Alice in the tunnel, until I nearly drown myself. 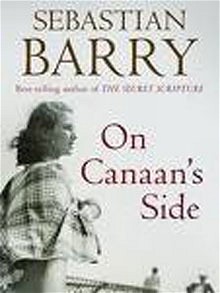 Such a visceral reaction to two novels read back to back. Either my hormones have been sucked up and spit out by a cyclone or I have discovered – upon reading my second novel of Barry's and first of Barnes' – two authors who speak to me as few other writers have, putting them in the same category as William Faulkner and Virginia Woolf. None too shabby a company.

The thing is, they're so different! Barry is poetic, Barnes sparing. Both know exactly when to twist the knife to elicit a reaction in the reader. Their timing is impeccable. And, as for their endings, It was fairly obvious where Barry was going, though no less wonderful to read because of it. As for Barnes, the reader knows something is up, but not exactly what. I guessed, but had it wrong. And I'm very glad to say that, because there's nothing more irritating than guessing an author's intention and being right, then feeling no reward from having gotten there.

Blimey. If you've been hanging about here over the past few days (and if not, WHY NOT?!) you'll know I'm dead set on reading all the Booker Longlist contenders I can. Barry was first, and knocked me off my feet. I thought to myself, "Self! Here is your winner." And he still may be. He may! But Julian Barnes… The two of them have each smacked my gob, and I am deathly afraid what I'll think of the other books.

Both deserve the award. Both have had nominations previously (Barnes 3, Barry 2). Both have resumes as long as both my arms put together. Scholars have seen fit to write works of criticism about them. Barnes' earlier works have already been archived, that's how brilliant he is. Barry has written more plays than novels. Far more. Finally, Barry is Irish and Barnes English.

And I am torn in two.

It's not that I didn't realize these two, plus Alan Hollinghurst (who won the Booker for The Line of Beauty in 2004) were the three huge names in the Booker pool. I expected all three would blow me away. I just didn't realize in advance how strong my reactions to both Barry and Barnes would be. And Hollinghurst's book is next…

I can see the newspaper headline now: