For more than a decade I've wanted to see the yearly hot air balloon launch in Lisle, a suburb located about an hour from here. This year marked their 29th anniversary. Pretty impressive they've kept it going so long.

I'd estimate there were 20 or maybe 25 balloons, each requiring a team of five or six to inflate and keep the balloons grounded  until time for launching. A tarp was  laid down first, to minimize any damage to balloon itself, before laying out the balloon on top of it. I couldn't see the whole process very clearly, since we were so far back, but I saw a lot of people holding a lot of lines, plus at least one person in the basket controlling the flame.

The balloons are laid out according to the direction of prevailing winds, in order to facilitate their inflation without them blowing all over the place. And, of course, the winds changed direction halfway through, making it necessary to adjust a bit. All that meant was the wait was a bit longer between launches. Not a big deal.

The colors of most of the balloons were spectacular, minus the advertising balloons. I thought those cheapened the effect, but of course it's sponsorship that keeps the festival running. 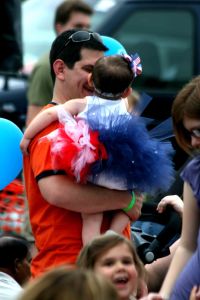 In addition to the balloons, there was a carnival of mostly food tents and a few rides. I avoided that. Crowds make me nervous enough without rubbing up against people, trying to navigate through the fair. Instead, we sent the kids out to forage some funnel cakes and drinks. Because that's what they're for, and when there's food involved they're usually fairly compliant. 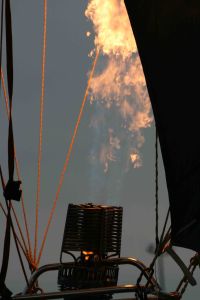 A pretty cool experience. I've never been so close to hot air balloons, though when we first moved here a nearby balloon launch used to send balloons over our house almost every weekend in the summer. And, ironically, yesterday morning we awoke at around 6:30 a.m. to the sound of a flame firing. We looked out the window to see a bright yellow balloon passing over our house, so close we could almost make out the faces of the riders.

They're gorgeous, with all their brilliant color. You couldn't get me up in them. I'm afraid of a ladder above two steps. But I love watching them.

Hope you enjoyed the vicarious experience of the Hot Air Balloon Festival. And, if you're in the Chicago area, it'll be back again next year – economy willing.