Was I the one just recently complaining about how unusually cool and rainy it's been here? Well, I'll have to shut up about that as it's now right about 90 degrees here today, and with, as far as I can tell, roughly 500 % humidity. That makes the temperature feel as if it's about 200 F, give or take 50 degrees. And, remember, I'm the native southerner with absolutely NO tolerance for heat WHATSOEVER. Also the one with skin so white I've accidentally signalled planes just by lifting my arms, leading to several military food drops, and I want to say that pre-packaged food meant to last for eternity could actually be worse. Could be better, too, but could be worse.

Despite the heat, after a rousing lower body workout (not nearly as sexy as it sounds) at the gym, during which I was able to ratchet up the weights by tens of pounds, lifting them with no trouble whatsoever (YAY!), I came home and decided it was probably a good idea to get out of the house, in 200 F, sunny weather, and take my by now customary walk to a nearby park, one with a lovely natural area where butterflies, all manner of birds and even the occasional deer enjoy congregating.

Because of my glowing white skin, and the fact I freckle like a map of the universe, I put on a generous spray of SPF 35 sunblock. For good measure I applied it twice, because I hate getting burned, with all the accompanying pain followed by peeling – decidedly unattractive. It's a wretched feeling and also puts me that much closer to death by skin cancer, such a preventable disease it's foolish not to take precautions. But anyway, in the process of spraying on my SPF 35 I somehow managed to send it up my nose. I have to say, I've felt better things, but at least my nasal passages were safe.

I wasn't the only one at the park, but in total there were only six of us. Four doubles playing tennis, a young man (college age?) performing indecent exercises such as sprinting and skipping about, and then me, of the pale skin. Because I've been doing three laps around the park (that, plus the walk there and back, equals a mile), I decided I'd double that. Why? Dunno. Sun stroke?

Oddly, two couples were sitting on their front cement step watching all of us, while drinking beer. It's not as if they looked comfortable there; I imagine there must have been more space in the back of their house to hang out and socialize. But apparently all the action going on was too much to resist.

Somewhere around my third lap I heard them commenting how they couldn't imagine exercising in this weather! Not even walking. Well, thinks I, some of us are just stronger than others! Then I heard one of the gentleman suggesting they get some exercise playing a rousing game of cribbage. Much laughter was had, probably partially to do with alcohol consumption, plus the heat.

But I was well-equipped for the heat: wearing shorts and tank top, water bottle filled (ice having melted before I'd even turned the corner of our block), towel for inevitable dripping face, and of course two good coats of sunscreen.The first three times around were so easy it was pathetic, and by lap four I was thinking how wonderful and strong I am to be doubling my walking! By lap five, however, about a third of the way around my knees started aching, along with the muscles in both legs. By the time I reached the nature reserve area I realized lap six was beyond reach. Somewhere between there and the first turn in the block (we don't have square blocks where I live, thus there are several twists and turns) coming home, I realized I was on death's door. Vultures were beginning to circle, and I was nearly out of water. I limped from shady spot to shady spot, the heat wafting up from the asphalt feeling like the heat of the Sahara. Final turn toward home, I thought my first sighting of my house must have been a mirage. It was like in the cartoons, no matter how far I walked the house didn't seem to be getting any closer… But I was determined, promising myself I wouldn't die until I got into the house. 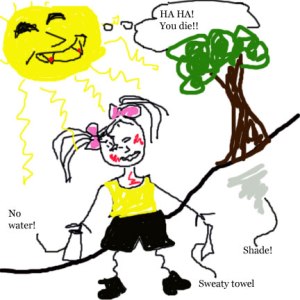 Ah, the house! Central air conditioning! Tap water! Popsicles! Showers! Long story short, I did not, in fact, die, though I'm sure it was very close. Had I decide to take that sixth lap around (brave soul!) it would have undone me. Instead of sitting here, chatting with you, I'd be sitting in God's waiting room waiting for my judgment, cooling off before what's all but guaranteed to be an eternity of heat.

Think I'll stay inside the rest of the day, taking fluids intravenously. No rest for the wicked, though. There's enough laundry to keep me busy, and then some.

So, that's pretty much how my day's going. How 'bout you?