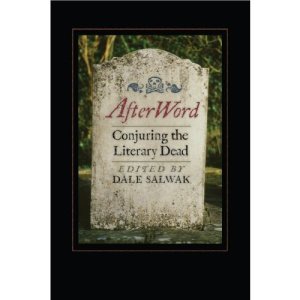 "…the dead endure indelibly in our minds; even when they are gone from our lives, they are vivid in our memories, only a breath or a thought or a remainder away."

The premise of the intriguing work of literary criticism is: what great writer would you want to resurrect, in order to ask him or her one burning question? Of course that's beyond the realm of possibility, therefore, what we wind up with is the opportunity for critics specializing in a particular author to ask about one problem, or one issue left unresolved, from the life of that author.

Each writer was given the same option to choose which question or questions he or she would pose, and to which author. It's a fine exploration for academics, a good exercise in making educated guesses. Since the "real" answer can't be known, each writer throws his or her best educated "answer" at the question. But for those like myself, with a B.A. in literature and no particular concentration, the book is uneven. Chapters addressing writers I know fairly well, such as: Faulkner, Samuel Johnson, Henry James, Jane Austen and Oscar Wilde, etc., interested me. Whereas those dealing with writers I dislike or care/know less about were almost completely uninteresting. A subjective measure, I realize, which will differ for each reader.

I personally enjoyed the chapters on Samuel Johnson and William Faulkner, two learned men legendary for their curmudgeonly, difficult behavior. In Johnson's case, some of that can be excused due to his ill health. An opinionated, occasionally abrasive character who would go to any lengths in order to win an argument, Samuel Johnson is considered one of the greatest literary luminaries of all time. And James Boswell, the man who followed Johnson, writing his biography, became famous by association. In this chapter, author Jeffrey Meyers wanted to know what Boswell had either censored or simply not known about the great man. And, among other things, Meyers assumes Johnson felt a bit of compunction at his treatment of one of his closest friends, Hesther Thrale Piozzi, expressing his disapproval of her marriage to an Italian, but not making up with her before she moved to Italy, where she stayed for the rest of her life. He was never able to apologize to her, or make amends.

Regarding Faulkner, it's no secret he drank heavily, not that that's in any way comparable to the medical challenges suffered by Johnson. He was also a serial womanizer with less than enlightened views on women. He openly flaunted his extra-marital relationships in front of his wife, Estelle, who reportedly stayed with him for the sole purpose of keeping her title as Mrs. William Faulkner. Not the best of motives, either.

Faulkner took screenwriting jobs in Hollywood, for both the glamor and experience and also the unending supply of young, nubile women. Estelle was, at 30, old, worn out and even "disgusting" to him. In order to stroke his ego, his trips to California provided him with a succession of mistresses. And when Estelle insisted on going along? He didn't slow down at all, blatantly flaunting his mistresses in front of his wife. Was he ashamed to admit any of this? Not one bit.

Then, there was Jane Austen, and the question of why she chose Emma as the heroine of the novel of the same name. I found this chapter a bit hard-going, not as interesting as I'd hoped, and also not as clearly reasoned. Being an average Janeite I felt let-down that of all the questions one could ask of Jane Austen (my own being what was she doing during the many "missing" years of her life, and whether or not there was missing work written during that time), the question of Emma's qualifications as a heroine was first and foremost. Again, highly subjective.

Though it may sound like an odd comparison, this book put me in mind of the reason I don't like historical fiction. I get uneasy wondering where truth leaves off and fiction begins. If I'm going to read about a particular period of history, I read nonfiction. Just as if I want to read about a particular author, I read a biography, even knowing this genre isn't immune from its share of inaccuracies and even occasional guesses on the part of the writer.

So, though I enjoyed the idea of the book, and reading suppositions about writers I personally admire, it still fell a bit flat. Indeed, at times it felt almost hokey, as though the writer were consulting a medium in order to tease an answer out of a departed subject. The juxtaposition of that with serious literary criticism I found a bit jarring. Perhaps academics will enjoy it more, having surely engaged in similar "what if" scenarios such as those presented in this book.

One aspect I can praise is the fine writing. I have little time to read literary criticism, putting it at the back of my reading shelf, preferring instead to read primary works and not criticisms, but it's a comfort knowing good criticism is still being written.

Overall, a well-done academic work, somewhat unappealing to many general readers of literature.

[Thank you to NetGalley for providing me an electronic copy of this book.]