I blame the upcoming end of the year mentality for the following post, which unlike the purpose of most of my posts probably won’t cause anyone to laugh. Unless you really hate me or something, in which case you’re a jerk and I hate you back.

Otherwise, there’s just not a lot of fun in today’s post. Education, but not what you’d call “fun.” What there is instead is a very honest portrait of chemical imbalances in the brain, how they’re completely out of the control of the one who suffers, and why no one should feel ashamed to admit they suffer from them. It’s certainly not a choice; you’d have to be nuts to choose to live through it. Every now and then I write one of these, because I don’t think the subject gets aired enough, that it’s yet become mainstream enough more people don’t understand it better.

I think this needs some short biographical background to make any sense.

About 35 years late I started seeing a therapist regularly, which I’ve been doing weekly for around three years now. This was precipitated by my life spiraling out of control, triggered by having been raised by criminally negligent parents in a loveless home. Essentially, my (at least in some ways) development is stuck at around four years old. I’m not talking intellectually so. I have a Masters degree, and a family consisting of three kids, one husband, two dogs and one cat. But in less obvious ways, mostly emotionally and cognitively, I’m nowhere near my real age. Instead, I’m an angry, thus powerless, child.

I know; that’s a toughie. You’ll just have to take my word for it.

For roughly the same length of time I’ve been in therapy, I’ve been seeing a psychiatrist, to help rein in the out of control chemicals in my brain. He’s reluctant to place labels on people, but for the purposes of insurance had to. Thus, he deemed me bipolar, with debilitating depression and a bit of ADD.

My psychologist, on the other hand, hasn’t been in total agreement. She’s cool with the depression, and definitely the ADD, but not so much the bipolar. That’s mostly because I don’t spend time above the line of “normalcy,” that I have no delusions of curing cancer, climbing Mt.Everest, or even being a success at anything.

Quite the opposite, in fact. To my way of thinking I’ve made no positive impact on the world, or life in general, and if I were to cease to exist it would have absolutely no negative effects at all. And it’s this she works hardest to reverse, through a therapy heavy on self-kindness and forgiving myself for essentially being human. Because my belief I should be better is irrational. Not as in I could be more healthy, I could improve other things about myself, etc., but rather that I’m as competent as my intelligence level and experiences combined allow me to be.

She’s long thought bipolar wasn’t my issue, but only last week shared with me she believes, instead, I’m actually “unipolar,” a condition characterized by the dominance of depression, lacking the extreme highs characterized by true bipolar. 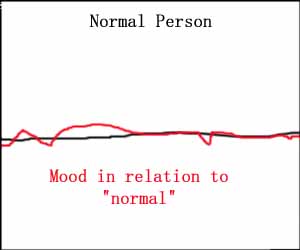 A “normal” person is usually reasonably happy, sometimes really happy, and has occasional sad moments which pass fairly quickly. Also, the sad moments usually have an actual cause, such as the death of a loved one, seldom hitting out of nowhere. 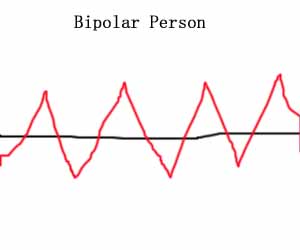 A bipolar person, on the other hand, boings all over the place – some more rapidly and extremely than others. Seriously depressive – even suicidal – episodes bounce back up to exhilarating highs, with no particular rhyme or reason. During the highs bipolar individuals believe they can do anything, that they’re extraordinarily talented in some way. And usually they are, often geniuses in their field.

Then you have the “unipolar” person, who spends most of her time in the darkness, occasionally dipping down into the dangerously dark, hardly ever achieving “normal.” In fact, those afflicted with unipolar are often uncertain what “normal” even is, having seldom – or never – experienced it.

And that’s where I am, hanging out in the unipolar region where it’s usually pretty dark and grim.

To compensate, I’m often making attempts to be funny, usually in writing but also verbally – when I’m relaxed enough, that is. I poke fun at myself – often good-naturedly – and use sarcasm as a means of lifting myself up out of the dumps. It’s a very real part of my personality, something my kids love about me, because I can make them laugh about stupid things, and the fact so much of life is utterly ridiculous. Occasionally my humor is dubious in taste, but I rely so heavily on it that doesn’t bother me all that much.

Sure, I occasionally regret having said something hurtful or unintentionally mean, but that’s pretty rare. Other times I want my target audience to, frankly, SUCK IT, usually because they take themselves way too seriously and are assholes. Or because they’re evil, judgmental or any number of other nasty things.

Now you’ve gotten a pretty good education in psychology, if I may say so. My experiences with it have been profound, and prone to analysis as I am I couldn’t help noticing a few things. I’m sharing them with you, mostly for education purposes, but also for the support others going what I’ve been through are suffering themselves.

I’ve been there. I’m still there. And it’s tough. But if you recognize yourself in anything I’ve written about above I encourage you to get some help. It may not “cure” you, but it will make life seem a little lighter on your shoulders.

And I promise next time I’ll be a lot lighter, a lot more the “me” readers of my blog have come to know. Both for you and for me.