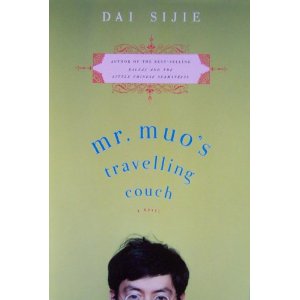 Two books in a row my fiction book group hasn't been crazy about, but fortunately that had little impact on how enjoyable the discussion was, each member bringing in her own perspective, discussing aspects some either missed or just dismissed as unimportant, etc. Interesting how opinions can change in the course of an hour.

In the basic plot, Mr. Muo's returning to China after having spent the 1990s in France, where he received his doctorate in psychoanalysis. And his biggest influence? Freud and his Interpretation of Dreams, which he either reads or talks about seemingly nonstop.

His return is, in part, precipitated by the urgent need to help his beloved, Volcano of the Old Moon, earn her release from prison. She was taken in for the offense of photographing the torture of members of the Western press, and Muo's returning – his life savings tucked in his, erm, underwear – to do what he can to help her.

He's told his chances will be assured if he hands over all his money to the corrupt (of course) Judge Di, but in the course of sitting in the man's office something tells him there must be another way. And there is. Judge Di hinted very strongly he'd release Volcano of the Old Moon in exchange for a virgin.

Off goes Mr. Muo on his mad quest, and from this point on the plot becomes more than a little convoluted, taking liberties with timelines by flashing back suddenly, throwing the reader into a tailspin. Some authors do that quite well. Flashbacks can be a brilliant method of filling the reader in about past events. Other times they can make you bang your head against the wall in frustration. We experienced more of the latter with Mr. Muo.

Not to say there weren't some hilarious moments. I highlighted lots of passages, more than anyone would want to read. In one scene Muo's confused for a raving mental patient, who tries running right past him, and if Muo hadn't mistaken the man for the Judge (because judges always run around in hospital nightgowns?) all would have been well. Instead, into the psycho ward he goes.

Aside from the humor were the passages devoted to books, gorgeously written odes to the love of books and reading:

"The spasms in his legs subsided as little by little he staggered along the pavement, lugging the plastic bags full of books. "If I ever become a millionaire," he vowed, "I'll just buy books, books, and more books …"

The verdict of the group was the book's oddities were many, as were its confused, nightmarish images. Not a book that's easily understood, though digging deeper into it explains many of the more obscure themes. All in all it was a thumb's down, but thankfully I wasn't roasted over an open fire by a book group gone wild.

To me, the book's depths could be much better appreciated given time to actually think about and study them. From reading various reviews and interpretations I have an idea what more is there, but frankly I don't have the time to work on that further. I appreciate the book, but to me it's not worth plumbing the depths with so much else out there yet to be discovered.

So my own vote was a little more generous, but all in all it made for a pleasant hour. As far as other book groups go, this one's better suited to those more willing to dig deeply. AndI mean VERY deeply, following the whole Freudian theme, the critique of China and Dai Sijie's own life story woven through. Otherwise it may be better skipped over.

Hemingway's father was very into taxidermy. Bit creepy but one of the few original items in the home.