Shocking, to put it mildly. Since the resurgence of my interest in Colonial American history I've also been looking into finding books about the witch trials at Salem. I often use Amazon to find the titles, then check my library system to see if the books are available by loan. So, I found this fascinating book about a neglected witch trial in history, one over-shadowed by the events at Salem. I needed to enter the search term "witchcraft" into my library's catalog to find it, but IT WOULDN'T LET ME. It blocked the word!

I'm not looking to BECOME a witch. I don't even believe in witchcraft as a force. All I wanted was information. And that was blocked? I suppose Satanism must be, too. So, even if I were writing a book on Satanic cults I couldn't access the information that's in the system. Books libraries own, I wouldn't be able to find.

Unbelievable. And I didn't think my library system censored. Guess I was wrong.

This is one of the reasons I became a librarian. A lot of people seem to believe it's solely because I'm bookish and quiet. And yes, I'm both. Others think I just didn't have enough literary ambition so I'm settling for working around the books others more talented have produced. I don't look at it that way. It's not a jealousy thing, and not a quiet thing. Because, as I've learned, librarians work with the public. It's actually a very social profession. It's forced me out of my shell in ways I never imagined. Do I still like my shell? I love it! I have it decorated just the way I like it and it's cozy in there.

But that's not the point. The point is being on the front lines, disseminating information (and, hopefully, the right information), while also fighting a battle on the home front. That is, the battle to protect the First Amendment rights of American citizens through helping accumulate a collection of use to the community and the library system.

A lot of people may think that's goofy. This is the 21st century, and I live in the Chicago suburbs, not some superstitious backwood. But guess what? First Amendment issues come up here. I've spoken with people who expressed shock and dismay our collection includes sexually explicit materials, surprised they were in no way "warned." I guess we need to screen all the materials to make sure no one could  possibly be offended? Right. Because everything must be fully politically correct.

If that were the case we'd be down to bare shelves.

Books on the aforesaid subject of witchcraft, as well as other topics not considered "safe" for the community at large, are some of the most frequently stolen books. Self-imposed censors afraid to bring up the conversation with us often just take offending materials. It's an easy way to make sure the rest of us are safe from corrupting influences.

So, I can't enter the search term "witchcraft" in our catalog without getting the BLOCKED error message, with the reason listed as the term "witchcraft" is not allowed. I can enter "witch," and "Salem," but what if that's not exactly what I want? And if this word is blocked, what ELSE is?

I am so, so disappointed. But I will let my supervisor know, without a doubt, and express my own First Amendment right to reinstate a search term that has no reason to be forbidden.

If that doesn't work I'll work up a spell that WILL! That'll teach 'em… 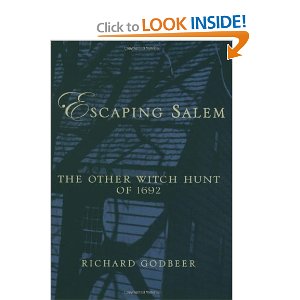 One of the offending books…

10 thoughts on “Censorship: the ultimate ignorance.”