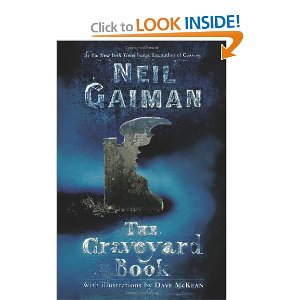 Spent my weekend RIVETED by this book. Yes, it's aimed at young people aged 9 – 12, but wasn't it the same for Harry Potter? And, speaking of, The Graveyard Book is, in some ways, Harry Potter condensed. And I know there are only so many plots, not to mention conventions in fiction. Orphans, dangerous sorts out to hurt said child, protective guardians… All are common. But in this book who cares? It's seriously fantastic.

After the rest of his family is brutally murdered (Gaiman is fond of his violence, though it's never terribly graphic – no pun intended), a nameless toddler climbs out of his crib and roams the streets, finding his way into a graveyard. Several ghosts find him, marveling that a child so young should be out in the middle of the night. Them comes the murderer, intent on killing this last member of a dangerous (to him and his people) family. The ghosts band together to protect the child, whom they wind up raising until he becomes a teenager.

The imagination in this book! The fascinating tales each ghost has to tell, the magic they share with him, the friends he makes… You have to read it to fully experience it. I was so absorbed I couldn't put the thing down. I even walked around the house carrying it, unable to put the darn thing down. I haven't been this completely transported for a long, long time.

So now I plan to go on an unanticipated Gaiman binge. He has a series of graphic novels – several, I think – one of which appears to be set in the 1600s. Those will soon be mine, ALL MINE! Assuming they aren't checked out, that is. And if they are, woe betide the patron who doesn't return them on time… (arching an eyebrow, menacingly)

If any of these themes appeal to you, do check out this book. Never mind the target age; if you're like me you'll find it unputdownable (is that really a word – ah, who cares). And you can thank me later (chocolate and gift cards accepted).

6 thoughts on “A new author I heart – Neil Gaiman.”

Somebody's head is bobbing after 45 minutes of tearing around the place, climbing everything, chirping, and inexplicably trying to shove her head in my mouth.