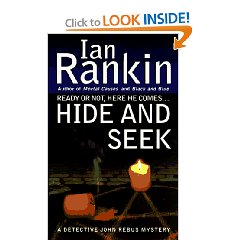 Yes, the stories can be a little improbable. And yes, there are bits of plot thread left dangling in mid-air, but I am officially addicted to Ian Rankin's Inspector Rebus novels.

There. I've said it.

Today gave me the perfect opportunity to lie in and read a mystery. I was ordered to keep my knee propped up and iced by the doctor I saw today, the one who's actually human and quite kind (as opposed to that robotic thing I encountered last time), after he injected cortisone underneath my kneecap. Did you just shudder? Because I thought I felt a shudder. Oh, sorry. That was me.

Anyhoo, as I have to keep my knee iced as much as possible for as long as possible today, Ian Rankin kindly kept me company. At the pace he plots it was no trouble at all finishing off book # 2 in the Rebus series. But it has left me feeling like a junkie in need of my next Rebus fix.

Re: Hide and Seek, okay it wasn't quite as good as Knots and Crosses, but I'm reading these as much for their literate main character as the plots. Hide and Seek involved mysterious deaths, clues so seemingly incongruous our man Rebus nearly had a breakdown, and lots and lots of stopping by bars to drink. Because our man Rebus, he's rather a lush. Oh, and the seamy underbelly/counter-culture of Edinburgh -toss that into the mix and you have Ian Rankin's Inspector Rebus.

"At night the summer sky stays light over Edinburgh. But in a shadowy,
crumbling housing development, a junkie lies dead of an overdose, his
bruised body surrounded by signs of Satanic worship. John Rebus could
call the death an accident–but won't. Instead, he tracks down a
violent-tempered young woman who knew the dead boy and heard him cry
out his terrifyng last words: "Hide! Hide!" Now, with the help of a
bright, conflicted young detective, Rebus is following the girl through
a brutal world of bad deals, bad dope and bad company. From a beautiful
city's darkest side to the private sanctums of the upper crust, Rebus
is seeking the perfect hiding place for a killer."

* I read a library copy of this book.