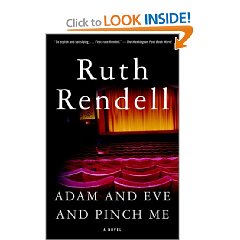 Ah, the psychological thriller. I've found no author who does it as well as Ruth Rendell. And I know, the title's strange. But there's a reason for it, not just a cutesy ploy.

This one's about a con man/womanizer who travels around London, changing his name as he changes his victims, always choosing names with the initials J.L. A handsome man with a weird sort of charm – spooky at times to the reader – he's able to fool these women into taking him in, supporting him, even providing him with pocket money. He's a professional kept man whose able to convince women of his undying love, proposing to most of them while robbing all of them blind.

He manages to keep ahead of the women, even the one he actually married and with whom he fathered two children, by moving around to different parts of London. It's only when his legal wife decides to remarry, to gain a higher station in life, that things start to unravel for poor J.L. And, when the next to last woman he's taken advantage of… Oops, no. Can't tell you that!

No one gets into the heads of the mentally ill like Ruth Rendell. And as far as I'm concerned, no one else knows how to keep a story taut and compelling from beginning to end. No wasted words or characters, no unnecessary scenes, no piece of writing less than superb. She's the mistress of the literary psychological thriller.

* I read a free ebook copy, via my library system's collection.

2 thoughts on “Ruth Rendell – Adam and Eve and Pinch Me”