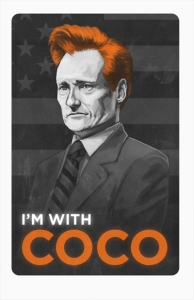 As of Conan O'Brien's last "Tonight Show" episode tomorrow night I am officially boycotting the network. Which will include the Olympics.

Nothing pleases me more than knowing this smarmy network is set up to lose $200 million on Olympics coverage. Before it's all said and done hopefully that number will only rise. Shoot for $ 500 million, losers!

And Jay Leno? What do you call someone who gives something away, then demands it back?

5 thoughts on “Biased statement of the day.”