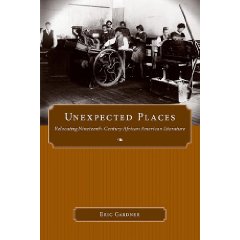 So, blog police, yes, this was a free review book. Had to fit that disclaimer in there somewhere.

Listen to how fascinating it sounds:

"Like many students and scholars, my first experiences with
nineteenth-century Black literature centered on stories of the South
that were published in northeastern urban centers. Growing up in the
rural Midwest, I was insulated from their radicalism not only by time
but by myths of northern liberalism, geographical distance, and narrow
definitions of nineteenth-century Blackness.

Deep archival research, though, is beginning to show that
nineteenth-century African Americans throughout the nation used their
stories to advance individual and collective struggles. As a scholar,
I've grown to recognize that we need to return their voices to our
historical and cultural record; as a teacher, I've come to understand
that students need to see how close they are to nineteenth-century
Black literature.

Unexpected Places: Relocating Nineteenth-Century African American Literature
relocates and recovers Black authors and texts from "unexpected places"
from frontier Indiana to early San Francisco. In arguing that early
Black texts raised challenging and uncomfortable questions across the
nation, I hope to resituate the field of African American literature to
recognize a much more diverse textual landscape, including Black
journalism and poetry in newspapers, freedom suit case files, and many
more examples of ardent and, until now, lost expression."

Kind of reminds you of how literature by women was suppressed, how the big names shone but the little ones were shoved into a trunk and locked away. Eric Gardner found the trunks holding forgotten African American literature, and now he's published a book about it.

Haven't read it yet, but already I'm proud of him, and proud of the University Press of Mississippi for publishing it. My native state has come a long, long way.