Thought I was going to kvetch about the weather, didn't you. Well, I'll prove you wrong! I vowed I won't mention it's a balmy 4 degrees F out there, beating the weather man's statement it would be a mere 2 degrees. The fool. At least it's sunny. Yeah, like that makes a difference when you try to breathe and your nose falls off in your hands. 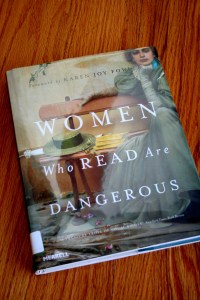 A wonderful book to share with you today, one I learned about God knows where. It's a lovely combination of the history of yet another form of repression against women – the taboo against serious reading – and art through the ages, defying the long-held notion women who read risked addling their tiny, underdeveloped brains.

In the 16th century and previous, forget it. Women were seldom even taught to read, and then only if they were of the upper classes, having fathers who felt generous toward their girls.

In the 17th century, women such as Margaret Cavendish and Delariviere Manley were playwrights, attempting to support themselves and their households by the wit they poured out through their pens. And their reward? Being called whores, or insane. Not sure which is worse, really.

In the 18th century the novel came into being. This was considered "female" reading, though some of it was actually pretty racy – including books featuring whores (Moll Flanders), men who "dipped their wicks" all over town (Tom Jones), and scenes featuring the rape and kidnapping of women (Pamela, Clarissa).

Guess the gender of these authors, why don't you.

Men, being classically educated, spent all their time on histories, philosophy and the like. Because most "serious" books were written in Latin and Greek, and of course only men knew how to read that. Only men were university educated. Leave the silly novels to the women, but keep the female characters within them subversive to the men. Let their goal in life consist of marrying up, while fainting all over the place. When they weren't being kidnapped, of course, since they were so weak and breathless from the constraints of corsets.

Then the 19th century, wherein women slowly began to gain acceptance as writers – though so many felt it necessary to write either anonymously – as was the case with Jane Austen, at first – or under male pseudonyms – George Eliot, George Sand, and the Bronte sisters.

In the 20th century all hell broke loose, allowing women such as Virginia Woolf and the Bloomsbury group to sleep around amongst themselves, then meet to talk politics and philosophy in their exclusive literary salons, ushering in the modern age.

And you know the rest.

It's important to be reminded of the course of history. Throughout so many decades it was deemed acceptable for women to read "improving" books, first devotionals and prayer books, then books on their place in the home and how to care for their families – including cooking and cleaning tips. We're talking up through the 1950s and '60s, too, alongside the counterculture including women like Gertrude Stein, Colette and Anais Nin. Though of course, throughout history up to and including then, women were either saints or whores. Ask yourself how true this is today, if it still applies.

The photos of paintings in this book are stunning, and the short essays make it an easy book to pick up for a bit of quick reading in between other life matters. This would be a
lovely book to keep out on your coffee table, both for its interesting
subject matter and the reminder the freedom we have today is relatively
new. And thus to be both remembered and championed.

No one asked me to review this book. I have to tell you that. I'm just so entranced by it, so impressed. Hope some of you will be, too.

Women Who Read are Dangerous

4 thoughts on “Women and Books: A Dangerous Liaison”