So, how much snow do we have thus far? Oh, about this much:

There's supposedly more expected later today, but compared to last night's storm it'll be nothing. They're talking only 1 or 2". Pah! If you live in Chicago that's less than nothing. We laugh at anything below a foot. That's just nuisance snow.

Bad news? Frigid cold and winds of up to 50 miles per hour are forecast, starting later today. Snow already on the ground will blow around, adding to the new fallen snow, making for one big, slippery mess. And I'll have children to pick up from school, work to get to and back from, and a driveway to shovel. Not a particularly happy scenario. 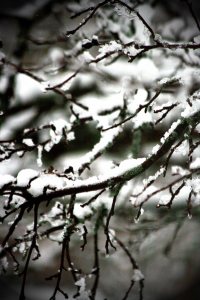 We've just been spoiled by the mild temperatures this season, and weren't ready to be socked with a winter storm yet. But it's a good thing the snow plows were out all night, keeping our roads clear. They weren't bad this morning, just slushy and wet. But even then, traffic moved at a snail's pace.

Just another Chicago winter. I know. But it's no less a misery, no matter how many we weather. Pun intended.

4 thoughts on “Photos of the Day”