At this point, it's possible the closest I'll get to shooting autumn foliage this year will be confined to photos of the pin oak and maples in my back yard. The crab apple tree's a total loss, since it's been naked for over a month. Besides, its leaves only turn brown and shriveled, anyway. Two of the three other trees - two at peak and one approaching – are glorious, though.

The problem is there's just been no free time. If I have a semi-free day, the weather's crap. If the weather's glorious (like TODAY), I have to work. I may as well have an Invisible Fence collar on, like the dogs.

Life hates me. Let me count the ways.

The beginning of next week is supposed to be warm, and I think sunny. Hmm. Do I roll the dice and bet on next Saturday, when I don't have to work but the weather's uncertain, or do I just use up some of my time off during the week on a day projected to be nice? 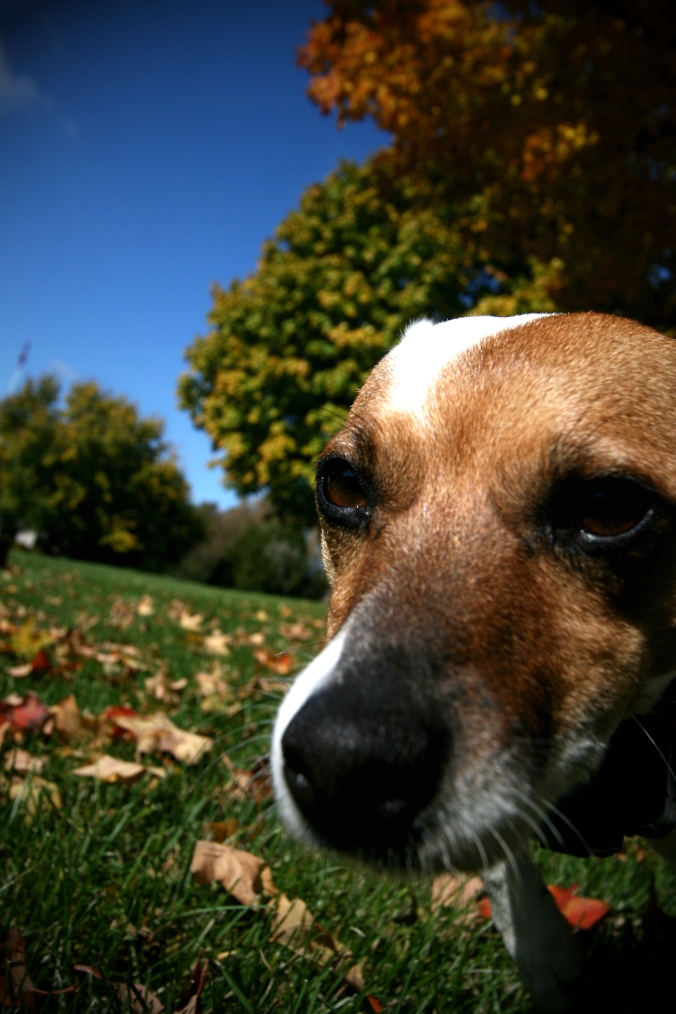 I should adopt a more Zen attitude, focusing my view of life inside rather than looking outward, bemoaning events out my control. Things like the weather, my disgustingly busy life, and the fact every time I pluck the one straggling hair off my chin a new one grows to replace it. Then it wouldn't bother me how much a loser I am, because I'd have no frame of reference about the outside world, having achieved balance and harmony and all that crap. I think the Dalai Lama said that once.

I also think my doctor would throw her hands up, falling back in her chair in exasperation - a charming quirk of hers, along with the constant muscle twitch in her left eyelid - if she knew I'd just said that. What she doesn't seem to get is it's easier being all Zen and wise in a monastery than outside in the real world, where the middle finger comes in more useful than the prayer pose. Try getting me up at 3:00 a.m. for meditation and I'll give an example.

Speaking of Zen, the photo of our dog Lia – above - looks unusually contemplative and reflective, considering her character. It's almost meditative, when in fact it was taken minutes before she went tearing around the yard, running in huge circles for no apparent reason. Until she misjudged while negotiating a turn and slammed into a flower pot.

And yes, I found that hilarious. Very un-Zen to laugh at the pain of another creature, but you just had to be there to see her look of complete shock.

When the most entertainment I can find is watching the dog take a header into a ceramic pot, I think I seriously need time away from the house. We'll see how things look early in the week, what I can push aside and reschedule, and if a day off would actually work. My luck, probably not.

Make sure you tell my doctor I said that.

One thought on “Zen and the art of photography.”