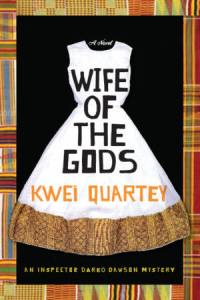 I can feel – or maybe sense is the better word – writing that comes from love of the craft, and not from a misguided hope for fame or fortune. Whether this is a matter of subtlety of language or the transmission of intent from author to reader I'm not sure. More likely, it is a revelation of the spirit of the writer, a baring of pure soul creating a work of true art. Kwei Quartey is this sort of artist, one who exudes the spirit of a true writer.

Quartey does especially well creating the exotic atmosphere of Ghana, immersing the reader in the complex culture of a country torn between tradition and superstition – in the villages – and the bustle of modern, big city life. He is also a master of character development, drawing the players in the novel in such a way they are three-dimensional, with characters and motivations which are completely believable.

Darko Dawson, the main character, epitomizes the clash in culture which is a theme in the book. He returns to the village where his mother once lived, where his Aunt Osewa and Uncle Gedze still reside, after being summoned to help solve a mystery involving the death of a promising young village woman studying to become a doctor, in the course of which Dawson finds himself conflicted between old and new. A detective in the city of Accra, he is chosen partly because he's a seasoned detective, and partly because he speaks the native dialect of the village of Ketanu.

Dawson also has a more personal reason to return. His mother had disappeared during a visit to the family of Darko's aunt decades ago, and hadn't been heard from again. After a dream in which his mother appealed to him for help, he hoped the excursion back to the village he hadn't visited in 25 years would bring to an end all the uncertainty as to what had happened to her.

Working against him, threatening to thwart his efforts, were superstitious village residents. Many times he found himself stymied by the culture of his people, frustrated by their seeming backwardness, having to find ways to work around it in order to perform his work.

Two particularly troubling village men were a polygamist and the local healer. The polygamist, Togbe Adzima, was the chief and High Priestof the village. As such, he was entitled to marry very young girls, even those who were pre-pubescent, a truth Dawson found utterly revolting. The local healer, Isaac Kutu, was a figure of suspicion early on, as the victim, Gladys Mensah, had visited him in order to speak about his medicines, and supposed holistic cure for AIDS, a cause she championed.

In the midst of it all, Darko and his wife Christine were the parents of a young son born with a hole in his heart. He needed surgery and soon, but there was no money for it. The boy's grandmother, steeped in the old ways, urged them to treat him with the help of a healer. The tension between Darko - subject to violence and blind rages – and his mother in law caused much butting of heads, Darko's behavior tempered only by his wife's urgings.

At no time does the pace of this novel lag. The twists and turns are breath-taking in their skill and suspense, and the interconnectivity of the complex characters – and their potential motives – are skillfully handled. By the time of the denouement, the reader will be able to look back and see the clues Quartey left as to the potential killer, subtle though they are.

The blend of compelling, intersecting plot lines, as well as fully-realized characters, make for a story promising much for the career of this first-time novelist. The conflicted nature of Darko Dawson, caught in a struggle between past and present, guarantees sequels as intense as Wife of the Gods. The reader will find herself impatiently anticipating the next installment of what will hopefully be a long series of detective mysteries.

2 thoughts on “Blog Tour: ‘Wife of the Gods’ by Kwei Quartey”