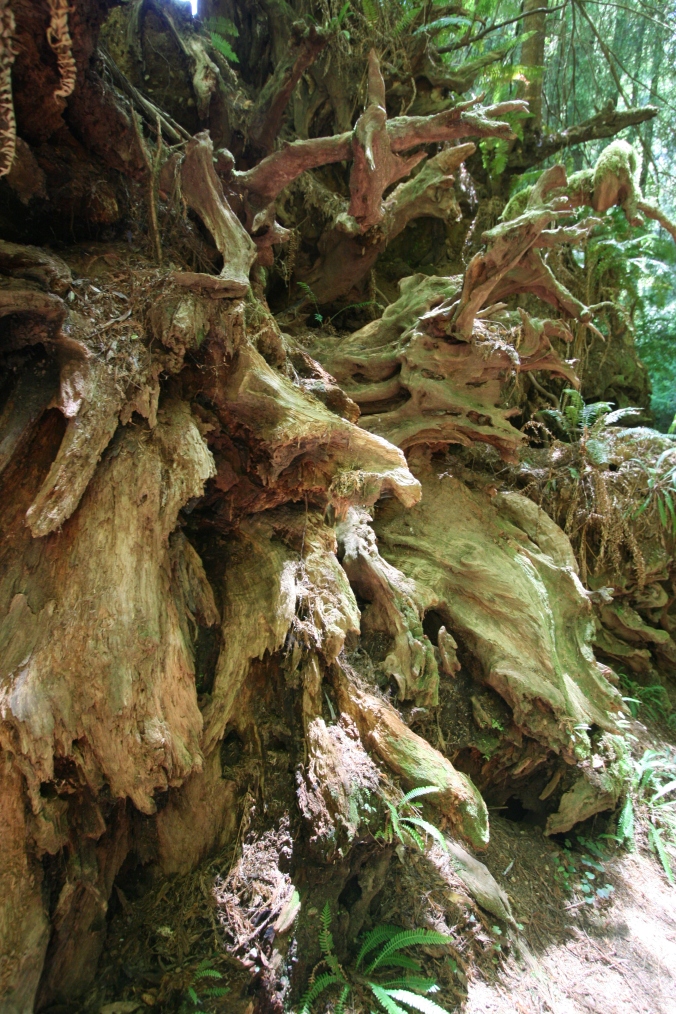 Finding a way to show perspective is difficult when it comes to the redwoods. That's why I photographed a stranger, in the third photo down (left side) amongst some of what turned out to be the less impressive of these massive trees. Others are several times the circumference of these, but this gives you an idea of their height.

Redwoods can live thousands of years. Take a minute to imagine that. Think of the history they've lived through. Some of them are pre-Christ. I can't get my brain around that fact. Each of our lives is barely a blip in theirs.

You can't imagine how majestic these trees truly are if you haven't seen them. If you're alone on the paths, which I often was (not realizing bears inhabit these woods!!), it feels like stepping into a prehistoric forest. And essentially, that's exactly what it is. The quiet is absolute. It feels like a tropical rainforest, only without the oppressive humidity. There are ferns everywhere, but hardly any other plants. Not enough sun filters through to nourish anything else. The paths themselves are bouncy from thousands of years of decayed trees and fir needles dropping, making for a pleasant, peppy walk.

It's one of the most mind-blowing places I've ever been in my life.

I've decided when I die I want to have my ashes used to fertilize a redwood tree. You can buy tiny redwoods in all the gift shops, so I've let my family know when I die they're to have me cremated, travel to California and buy one of the little trees, then plant it in the forest, mixing me in with the rich soil. It may be technically illegal, but it could be done with minimal effort. The soil's so rich and loose. Even without official permission that's what they're instructed to do with me.

I'd be content knowing my mortal remains became part of a towering redwood tree. My family could mark it somehow, and come back to visit one day. Or not. They'd know I was a part of that tree either way, and that for potentially thousands of years I'd live as a part of it. When it falls, whatever is left of "me" will become the fertile soil for another tree. And so on, and so on.

I can't think of a more comforting thought than giving what is left of me to help something else grow. It sure beats hanging out in an urn on someone's fireplace mantle.

I took an unbelievable number of photos of the redwoods. I'll post a Part 2 to show you some more, but the shots I took looking up the trees are pretty similar, so I'll try and vary those. Hope you'll enjoy them.

Felt very tired this evening but once I started assembling Friday's bento box I perked up.