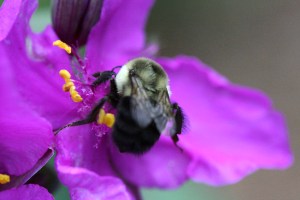 Hunny for a Rumbly Tumbly

I didn't set out to feature an insect theme this weekend. It just happened my macro lens caught both the box elder babies and this bee running amok in the garden on the same day. Before the lens and I signed a peace accord, I would have probably ignored the box elders, but the bee I'd have pursued all around the yard. They're so fuzzy and cute.

My kids run screaming from bees, scared to death they'll get stung. It doesn't matter how many times I tell them they won't hurt them. To prove that, I'll reach into a flower when a bee's buzzing around. Now watch, one of these days I'll probably get stung. That'll be another parental lesson out the window. Just add it to my list of failures. 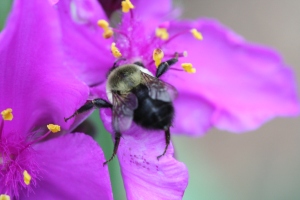 I'm bummed I didn't capture the hummingbird I saw flying around our blue flowers out front. My goal, sometime over the summer, is to capture a decent photo one of those lovelies. It won't be with the macro lens, though. I take forever to get settled with the macro lens. It'll take the zoom lens, and a lot of luck.

And that concludes this weekend's nature lesson.

5 thoughts on “Photo of the Day”